It’s that time of year again, when a young man’s fancy turns to thoughts of an NBA championship and when he desperately represses memories of a mother fucking off-balanced three point shot that bounces on the rim 900 times before elegantly falling through the hoop to mercilessly end all of our hopes and dreams.

Yes, the 76ers are BACK BABY! A slimmed down Joel Embiid! Al Horford using his offensive rebounding prowess for the powers of good and not evil! Awkward photos of Markelle Fultz trying to raise his arms over his head while going down the final drop in Splash Mountain! What a year it’s shaping up to be.

It’s a NEW season and this calls for some BOLD takes, far bolder and newer than last year’s column where I proudly declared Mike Muscala would quickly become a fan favorite in Philadelphia.

END_OF_DOCUMENT_TOKEN_TO_BE_REPLACED

July 22, 2019…a date which will live in infamy. A date where so many innocently logged onto social media and found themselves in need of a new pair of pants.

A day which will be remembered by all as the date the Ben Simmons jump shot video hit the internet and showcased the $170 million man working on the most obvious weakness of his game and displaying what looks to be a much more confident touch on his shot.

My god. His shot is like the sun…it’s so bright and dazzling you can’t stare at it directly or you’ll be blinded from its beauty.

And yes, I know Markelle Fultz did the EXACT same thing last summer and we all went crazy for it. But this is different. How is it different? Fuck you, that’s how.

END_OF_DOCUMENT_TOKEN_TO_BE_REPLACED

The 76ers took a massive poutine shit in the Great White North in front of a national audience, and in turn gave the rest of the NBA step-by-step instructions on how to dismantle their entire game.

Despite putrid shooting in the first half, the clearly superior Toronto Raptors rallied to defeat the Sixers by double digits after completely negating two of their three best players through the night. Jimmy Butler kept the Sixers in it with 38 points, but when Ben Simmons is doing his best impersonation of the Invisible Man for 99% of the game and Joel Embiid is getting dominating by Jonas Valanciunas, it’s not going to end well.

And end well it did not.

END_OF_DOCUMENT_TOKEN_TO_BE_REPLACED

Sometimes, for whatever reason, we have posts that never get published. Call them the posts that time forgot, but today we have a special post that’s nearly TWO MONTHS old at this point. It’s still pretty good, but do bear in mind this was written in November. Enjoy!

If you did not listen to the NBC Sports Philly interview with Ben Simmons after last week’s win over the Hawks, please let me show you an incredibly ham-handed attempt to force a manufactured, unnatural nickname on a once in a lifetime generational athlete:

Joel Embiid was so excited about that win that we had to bleep him during his postgame interview with @MSullivanFrench. 😂 pic.twitter.com/Wg1sL5bhEF

No. No. NO. Dear god no, that nickname cannot stick. The Fresh Prince? NO. They peppered that stupid nickname throughout the broadcast and it does not fit. It’s too long, it’s very clunky, and it makes no sense.

Why “The Fresh Prince”? Because Simmons’ is young? Because he’s from Philadelphia? It’s based off a show that aired its last episode BEFORE Simmons was even born.

It’s awful and I guarantee you NOBODY outside of an NBC Sports Philly boardroom has ever called him “The Fresh Prince.”

END_OF_DOCUMENT_TOKEN_TO_BE_REPLACED

Ben Simmons and Joel Embiid should be locked up after the severe beatings they doled out over 48 minutes. It was so cruel, so brutal, the duo had to flee the state and the premises of their crime before local law enforcement officials could apprehend them.

Please call to put a stop to the violence you can see after the jump.

END_OF_DOCUMENT_TOKEN_TO_BE_REPLACED

I’m not a huge fan of looking back at old predictions or player analyses and mocking them for how incorrect they turned out to be (unless they come from @OldTakesExposed, then they’re just hilarious).

Everyone is wrong once in a while, and when it’s your job to be in the prediction business you’re going to vomit out a clunker every now and again.

Fuck, the other day I looked back at some old Facebook memories where I was VEHEMENTLY defending Evan Turner to a friend, claiming that his “world class defense” made up for his “struggling, but growing offensive capabilities.”

OH, and also claiming that Evan Turner would have a “much, much more accomplished career” than Demarcus Cousins.

The moral of the story is, and always will be, that I am a complete moron.

But I found one analysis written about Ben Simmons after the 76ers selected him as the #1 pick in the 2016 draft. It’s so horrendously wrong that it boggles the mind. Did the author get the numbers of the jerseys incorrect? Did he think he was watching Simmons the entire season, when he was really watching Tim Quarterman or Keith Hornsby?

END_OF_DOCUMENT_TOKEN_TO_BE_REPLACED 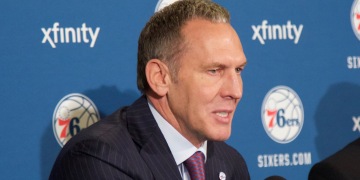 Philadelphia, PA – Bryan Colangelo spoke to media this morning at Jefferson University Hospital after reports had leaked out of the 76ers franchise claiming that Ben Simmons’ broken foot had been healing slower than expected.

Colangelo, who has come under fire this week for his tendency to be less than forthcoming about injury news, said Ben Simmons was “just fine” and he didn’t know what the tortured screams coming from the hospital’s operating room were about.

Colangelo excused himself for a moment to “take a phone call” as he ducked into the suddenly very busy operating theater.

END_OF_DOCUMENT_TOKEN_TO_BE_REPLACED

Are we getting too far ahead of ourselves? I can’t remember the last time I jumped off of my couch and fist pumped at the end of a 76ers game…

Are 76ers fans setting themselves up for a disappointment? This is just lightning in a bottle, right? They’re not…actually….good are they?

We all remember the movie “Major League,” right? Coach Lou Brown, the grizzled coach of the Cleveland Indians who had to seriously debate leaving his job as a tire salesman before taking the position, bellowed out the headline of this article to his bench coach Pepper after the lowly Indians swept their first series of the season against a mediocre team.

END_OF_DOCUMENT_TOKEN_TO_BE_REPLACED

Philadelphia, PA – Following a productive 2016 NBA draft, but citing that they are still not within striking distance of competing for a title, 76ers GM Bryan Colangelo announced the organization would draft and stash every single member of the active roster for 2016-2017.

“It just makes sense. Are we going to win a title next year? No we’re not. So why not get these guys some experience and see what we can do in 2017-2018,” Colangelo said.