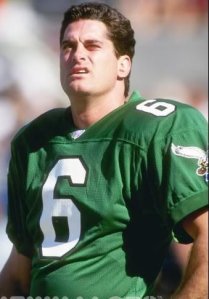 Coach told me it’s normal to bleed from the ears.

Bubby Brister. Solid, solid name. His name game was on absolute point for his two seasons as a Philadelphia Eagle, starting 16 games over the course of 1993 and 1994 after Randall Cunningham’s legs exploded into a million pieces (or something like that).

Just look at that face. Perpetually confused, a fine head of hair, a firm squint from his 800 confirmed concussions, Brister had all of the makings of a starting quarterback in the late 80s and early 90s. He defied all expectations and played in absolutely no notable games or provided any fun memories for hundreds of thousands of fans that saw him play over his FOURTEEN SEASON CAREER. He played from 1986 to 2000!

END_OF_DOCUMENT_TOKEN_TO_BE_REPLACED 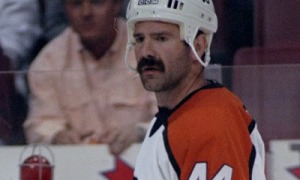 Dave Babych’s mustache led the league in penalty minutes in 1985.

Dave Babych, you marvelous son of a bitch. A depth defender on the Philadelphia Flyers for a season and a half, Babych’s main claim to fame on the squad was an unbelievable handlebar mustache (and a horrific lawsuit against the Flyers in 2002 that claimed a misdiagnosis of a foot injury shortened his career, but who’s counting) that he used to deter opponents due to its shear awesomeness.

END_OF_DOCUMENT_TOKEN_TO_BE_REPLACED

JD “The Real Deal” Durbin! Oh JD, you bring a smile to my face. Perhaps the least accomplished pitcher in Philadelphia Phillies history with a nickname (albeit it self dubbed), Durbin appeared in 18 games for the Phillies in 2007, starting 10 of them and going 6-5 with a 5.15 ERA.

He was obtained by the Phillies halfway through the season from the Arizona Diamondbacks. It’s a wonder as to why the Diamondbacks let him go, as he did appear in one game for them that season, in which he pitched two-thirds of an inning and gave up 7 hits, 7 runs, all of them earned for an ERA of 94.50.

But he’s the Real Deal! According to legend, after he made his first professional start in the Minnesota Twins farm team, he came back to the dugout after the first inning and told a teammate, “That’s why they call me the real deal.” 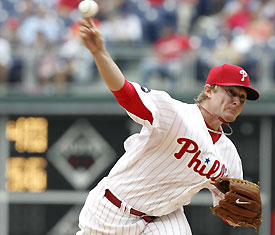 JD “The Real Deal” Durbin, most likely pissing someone off.

If only that brashness could have translated itself into some form of success in the major leagues. After he was released by the Phillies in 2005, he never appeared in another major league game.

• JD once threw a baseball into the stands after a game in 2007, striking Howard Eskin in the head and knocking him unconscious for several minutes. It was the largest ovation from fans Durbin would receive all season.

• Thought professional wrestling was real until he was 22.

• Started his own car dealership, Durbin’s Dodges, “where every deal is a real deal!” Was bankrupt in six months.

• Once tried to break the ice with JD Salinger by mentioning they shared the same first name. Was thoroughly dismissed.

• Once tried to break Cool Hand Luke’s record of eating 50 hardboiled eggs in one hour. Passed out on the clubhouse floor after number 35. Remained face down on the rug until 2 a.m. No teammate bothered to call the paramedics.

Corie Blount! Philadelphia 76ers power forward from 2001-2002. Larry Brown knew he needed one more cog to push the 76ers over the hump after bowing out in the 2001 championship round against the Lakers, but my-oh-my Corie Blount was not that cog. The 33-year-old waste of space had one and only move whenever his stone hands actually caught a pass, a blind, horrible turnaround jump shot that usually found itself bouncing off the skull of a fan in the fifth row of the First Union Center.

Blount appeared in 72 for the Sixers (somehow starting 21 of them) for the defending Eastern conference champions and did not dazzle. He averaged 6.5 points a game and less than a block a game, but to his credit he did average about 9 rebounds a game, most of them quickly followed up by a turnaround jump shot off the top of the backboard or an errant pass clanging off the scoreboard of the First Union Center.

Blount did lead the team in one key category….most times being called a “Waste of space hack” by Allen Iverson, averaging about 6.3 times per game.

– Blount was sentenced to one year in an Ohio prison in 2009 for marijuana possession. He did not see the irony in his arrest which cost him serious votes in the “High Times” Man of the Year award.

– Shoved into a locker by Dikembe Mutombo after every single home game.

– Unsuccessfully tried to get his teammates to call him and Iverson by the dual nickname, “The Answer and the Question.” Was shot down by Aaron McKie after he reportedly said, “The only question I can think of is why you’re still on this team.”

– Lost to a 14-year-old fan in a halftime “Layup, free throw, three point shot” contest. Was stuck on the free throw portion for 25 shots.

– Attended one of Pat Croce’s pirate ship dive excursions during the all-star break. Was left in the middle of the Pacific Ocean after Croce “forgot” he was still underwater. Made it back to the team for the start of the second half of the season, to the disappointment of everyone. 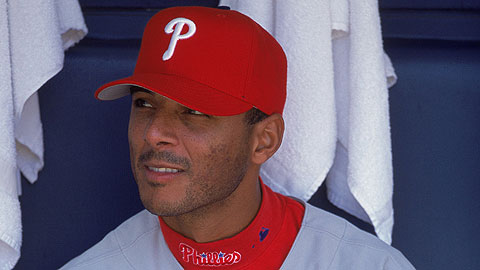 Rob Ducey reflecting on happier times, like when he wasn’t playing for the Phillies in the late 90s.

Rob Ducey! Phillies outfielder for three partial seasons from 1999 to 2001! Played 246 games for the Fightins and hit an IMPRESSIVE 15 home runs. He did, however, reach his career high in RBI for a season with 33 in 1999 with the Phillies, so that’s something he can always remember and look back on fondly.

Now, my memory isn’t what it used to be, but with an athlete of Rob’s caliber playing for the organization for three seasons, they must have been fairly good. Oh wait, they were 228-258 over that time period. They SUCKED and he SUCKED. God those late 90s Phillies teams were just wastelands for talent to go and die. When Rico Brogna and Wayne Gomes are the highlights of your roster, just call an end to your franchise, because you really have no hope.

– Once sprained his wrist filling out thousands of all star ballots in his favor. Was placed on the DL for two months and none of the votes were registered as his wife threw them away in the garbage when she didn’t want to taint the exhibition game with his shit.

– Accidentally knocked over Whitey Ashburn’s casket at his memorial service. Blamed his son, who is still banned from the city of Philadelphia.

–  Is rumored to have used a bat infused with the essence of a thousand orphan souls.

– As a prospect, his rating was downgraded for his habit of running to third base out of the batter’s box. Blamed it on the Coriolis effect, which made no sense.

– Traded to Toronto in 2000 by Ed Wade for a lifetime membership to Golds Gym. Wade used the membership three times. mes since.