It’s no secret that we love the old Veterans Stadium Liberty Bell at the Coggin Toboggan. Hell, we tracked the bell down to a Food Distributor company that neighbored Citizens Bank Park, where it lay in wait for years until a proper plan could be devised for it.

The Phillies confirmed to us in an exclusive story that they were planning to refurbish the bell and display it to fans for the 2019 season.

We even stalked the bell from outer space, finding satellite pictures of the monolith rotting in CW Dunnet and Co’s backyard. We procured exclusive pictures of the Phillies reacquiring the bell last year, seeing it in all its rusted out and weathered glory.

And now, finally, we know what the Phillies plan to do with the relic that I, personally, DEVOTED 10 YEARS TO TRACKING DOWN.

END_OF_DOCUMENT_TOKEN_TO_BE_REPLACED

Thanks to a reader who alerted us to this. Google Earth of C.W. Dunnet and Co. (3200 S. Lawrence Street, Philadelphia, PA) shows a perfect satellite image of the old Veterans Stadium Liberty Bell sitting in a back of the food distributor property.

It looks old, it looks rusted, and it looks AWESOME.

The Phillies recently reacquired the bell and will be putting it on display at Citizens Bank Park by the 2019 season.

We should have closer pictures of the bell next week as provided by C.W. Dunnet and Co.

In 2012 I sent an email to a contact I had within the Phillies organization with an odd request. Could he get me more information, and possibly the location, of the old Veterans Stadium Liberty Bell?

“I wanted to let you know that we are no longer in possession of the Liberty Bell. A while back we were contacted by the Phillies organization about reacquiring the bell. After discussing it internally, we decided that the plans we had to display the bell were too ambitious for now, and returning the bell to the Phillies provided the best chance for it to be ‘resurrected’ and given a chance to be displayed and appreciated by Phillies fans again,” Sean Scollon, chief business intelligence officer at C.W. Dunnet & Co., told The Coggin Toboggan.

James Trout, director, marketing services and events for the Phillies, confirmed the organization has the bell. The Phillies plan to refurbish the approximately 20-foot high, 15-foot wide bell and put it on display for fans at Citizens Bank Park as early as the 2019 season.

Any additional plans or location for the bell at the stadium is unknown at this point, he said.

END_OF_DOCUMENT_TOKEN_TO_BE_REPLACED

Oh boy. Perhaps drinking until the wee hours of the morning on a Sunday night at a wedding was not the smartest thing in the world to do. Hungover? You bet. Tired? Barely keeping my eyes open at work.

I’ll never drink again (until next Saturday, when we have to go to another wedding).

So yes, MAYBE it was a tactical error to do this when I’m 33 and have a four-month-old kid. Maybe. I won’t commit to this idea, but it seems at least plausible.

I probably just have the stomach flu. Yeah, YEAH that’s it! I’M BACK BABY!

So nothing today for you, dear readers. Please do me a favor and read quietly, as I’ll be slightly dozing at my desk with my eyes open for the rest of the day (learned it in the jungles of Danang, where the enemy never slept). 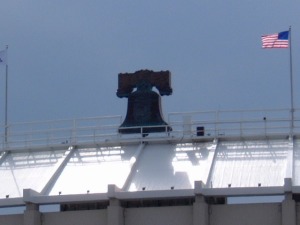 I’ve been searching for the Veterans Stadium Liberty Bell since April 16, 2012. It disappeared after the Vet was demolished on March 21, 2004.

But I’ve found it, and it’s still in South Philadelphia. It’s on South Lawrence Street, just a few blocks from Citizen’s Bank Park. C.W. Dunnet and Co. has the bell and they’ve had it in storage since the late 2000s.

But let me back up….

END_OF_DOCUMENT_TOKEN_TO_BE_REPLACED

The next target of Broad Street Media?

Philadelphia, PA – Just a day after acquiring the Philadelphia City Paper and announcing it would shutter the publication and delete most of its archives, ownership representatives for Broad Street Media revealed they have their eyes on acquiring another Philadelphia institution.

Perry Corsetti, publisher for Broad Street Media, confirmed the company will make a serious play at acquiring the Liberty Bell. If successful, Corsetti noted the company planned to “slap some advertisements all over that bad boy.”

“Why should people get to enjoy the Liberty Bell when it’s a direct competitor to us? Sure we could leave I t like it is, people do love it, but how would that make us money? When I look at the bell, I can’t but help to think that we could bring in some fabulous revenue by selling ads on all that open space. It doesn’t matter if they’re on the front, or the cover of the bell, if you will. It’s not that big of a deal, it’s just an old, run down bell, nobody cares. We know best,” Corsetti said, dollar signs spinning through his sunken, sallow eyes.

END_OF_DOCUMENT_TOKEN_TO_BE_REPLACED

Philadelphia, PA – In what can only be described as a miracle, Pope Francis cured the Liberty Bell of its debilitating crack prior to leaving the city today.

“He passed Independence Hall and onlookers inside said the Liberty Bell no longer had its crack. Unbelievable,” Mayor Michael Nutter said Monday.

The bell apparently was cured of its crack after Pope Francis nodded and waved his hand towards the tourists who were looking at the tourist attraction Monday morning.

Francis declined to comment, but only winked and nodded to the reporters when they asked him about the apparent miracle.