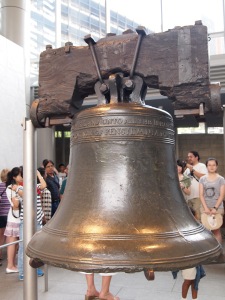 The next target of Broad Street Media?

Philadelphia, PA – Just a day after acquiring the Philadelphia City Paper and announcing it would shutter the publication and delete most of its archives, ownership representatives for Broad Street Media revealed they have their eyes on acquiring another Philadelphia institution.

Perry Corsetti, publisher for Broad Street Media, confirmed the company will make a serious play at acquiring the Liberty Bell. If successful, Corsetti noted the company planned to “slap some advertisements all over that bad boy.”

“Why should people get to enjoy the Liberty Bell when it’s a direct competitor to us? Sure we could leave I t like it is, people do love it, but how would that make us money? When I look at the bell, I can’t but help to think that we could bring in some fabulous revenue by selling ads on all that open space. It doesn’t matter if they’re on the front, or the cover of the bell, if you will. It’s not that big of a deal, it’s just an old, run down bell, nobody cares. We know best,” Corsetti said, dollar signs spinning through his sunken, sallow eyes.

“Wouldn’t a vaping ad look fabulous on the front of the historic landmark? That’s what the kids want, they want to learn about the vape life, not to see one of the greatest symbols of our country. That’s boring. People want event calendars and ads, nothing else. This is the future, nobody wants that old stuff anymore,” the out of touch gentleman said, sweating profusely through his Van Heusen shirt.

But this is only the beginning, Corsetti said, as Broad Street Media also has its eyes on acquiring the National Constitution Center, which they would immediately close and burn to the ground.

“Just too much competition. It makes perfect fiscal sense for us. Maybe we’ll keep some of the documents and sell ad space on them to Scotto’s Pizza in Cherry Hill. Actually, maybe we could write an article on Scotto’s Pizza, put it on the front of Philadelphia Weekly? Sure it has no journalistic value and our readers would hate it, but it would ensure they would buy some ads with us. I’ll make sure to directly order and bully my reporting staff into doing just that. I know journalism, after all, and there’s no harm in writing an advertorial to ensure we sell some ads, am I right? Reporters don’t have principles anyways, I know I don’t let them get in the way of what I do,” He said, breathing extremely heavily as he thought of how much money this would bring in the company.

As of press time, Broad Street Media owner Darwin Oordt was not available for comment, as he was too busy playing with his dog in the Cherry Hill offices and letting it shit all over the floor.