Philadelphia PA – Football fans across the country watched on in horror as Bill Belichick, an asshole of immense proportions and well known prick, and Pete Carroll, a 9-11 truther and all around hunk of shit, respectively led the Seattle Seahawks and New England Patriots to an appearance against each other at Super Bowl XLIX.

Insufferable prick Bill Belichick, who is no doubt receiving stolen information to win another crucial game to the disgust of millions.

NFL fans could only watch and suffer through both games, as the Packers squandered away a last minute lead to lose in overtime and the Patriots dominated the Colts for four quarters.

“Hey look, it’s not like the Packers are that great and I don’t know a ton about (head coach) Mike McCarthy, but I do know one thing…they’re not the fucking Seattle Seahawks,” said Patrick Mooney, a Cleveland arc-welder who dourly sat through both games. “And Bill Belichick, god I’d love to kick the teeth out of his head. Fuck, what the hell am I going to do for the Super Bowl? This sucks.”

Belichick, hands stuffed in his ratty Patriots hoodie for 99% of the game, scowled his way through a New England blowout of the Indianapolis Colts and sullenly tromped around the Patriots sidelines, never once looking like he was enjoying himself or showing one ounce of emotion. Millions of football fans throughout the country smashed remotes against household walls, declaring him a “cunt of epic proportions” and in all likelihood a “no good piece of shit cheater,” no doubt referencing the 2007 Spygate controversy. 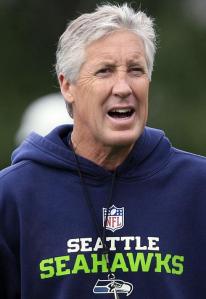 Carroll was not better received across America, as he mugged and celebrated for cameras after Russell Wilson threw a game winning touchdown to Jermaine Kearse in overtime of the NFC championship.

“He probably celebrated by watching Loose Change for the millionth time, god what a jackass,” said Tom Schwartz, an engineer from New York City, referencing the now debunked 9-11 truther documentary. “He thought 9-11 was an inside job and coaches one of the most hated teams in this country. God, I hope the 12th man stomps his head in one day when they suck again.”

Collective heads were held in hands across the country as the dim realization of two of the most hated teams in the league would be appearing in the final football game of the year.

“Who do I want to win? I think we’d all win if a 747 crashed into the Phoenix stadium and took out all of those losers,” said Chris Johnson, who threw a bottle of Wild Turkey against his wall and staggered outside of his home, where he promptly passed out on his front lawn.

However, as of press time, it was noted that moods throughout the country lifted slightly as fans realized that at least the Dallas Cowboys would not be in the Super Bowl.