Classy exit from this world.

San Francisco, Ca – Saying it was about time he “hit that old, dusty trail,” Peyton Manning cleaned out his locker, said goodbyes to his teammates, and rode a hearse off into the San Francisco sunset.

The 39-year-old quarterback has hinted to several close friends that this Super Bowl may be his last game, but few figured Manning would make the important decision moments after winning Super Bowl 50.

END_OF_DOCUMENT_TOKEN_TO_BE_REPLACED

Hey folks, it’s me! Crazy Don Tollefson! I’ve got 25 minutes of internet time I traded a bottle of toilet wine for to a member of the Aryan brotherhood, so I’ve got to make this quick. Have you been watching the NFL playoffs?! Are you excited for the Super Bowl? Well I’m here to give you an update on my FABULOUS Super Bowl packages that I told you about this past August!

I wake up with bugs in my hair and cockroaches on my eyeballs! They enjoy the juices! They’re my only friends in this god forsaken hell hole!

END_OF_DOCUMENT_TOKEN_TO_BE_REPLACED 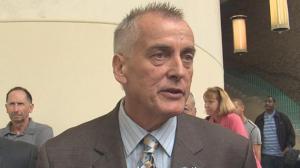 Philadelphia, PA – Speaking to reporters this afternoon, Ruben Amaro Jr. openly worried if Don Tollefson’s recent jail sentencing will in any way affect the delivery of his Super Bowl tickets.

“I heard he was just sentenced to jail for 2 to 4 years. Wow, I hope this has nothing to do with his charity, I wonder what happened?” Amaro said. “I still haven’t gotten those tickets from Don yet, he said they would be delivered this past weekend, but I haven’t seen them yet.”

Tollefson, of course, was sentenced to prison for taking hundreds of thousands of dollars from area residents who purchased tickets or VIP meet and greets from the embattled sports broadcaster.

Tollefson did not deliver on the majority of the purchases and bilked thousands of dollars from sports fans in the name of his charity.

“I just wonder if my tickets are going to get here this weekend or the next. I paid an extra $10,000 per ticket for all access, which Don told me would get me into the lockers rooms and even the huddles on field during the big game. I had no idea that was even a possibility, I can’t wait for that game!” Amaro Jr. said.

As of press time, Amaro Jr. was still waiting by mailbox for the postman to arrive.