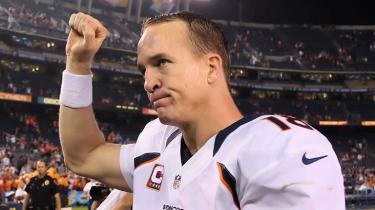 Classy exit from this world.

San Francisco, Ca – Saying it was about time he “hit that old, dusty trail,” Peyton Manning cleaned out his locker, said goodbyes to his teammates, and rode a hearse off into the San Francisco sunset.

The 39-year-old quarterback has hinted to several close friends that this Super Bowl may be his last game, but few figured Manning would make the important decision moments after winning Super Bowl 50.

Manning was gingerly placed into a body bag by EMTs and loaded into a black hearse, which transported him from the stadium to the closest funeral home.

Members of the media followed the historically great quarterback to Jacobstein’s Funeral Home, where Manning said goodbyes to his family and picked out a lovely but understated oak model with brass inlay to see him off into the afterlife.

“Well that’s it for me. I’ve done about all I can do. Bye bye, so long. It’s time for me to sleep forever,” Manning said, as he placed himself in the casket and slowly closed the creaking lid before being lowered into a freshly dug grave.

“Now please, let me enjoy my eternal slumber. Anyone who disturbs me will be forever cursed,” he warned onlookers.

At press time, Manning’s muffled voice could be heard saying “Omaha” over and over again as the grave was filled in with dirt.