Philadelphia, PA – A few weeks ago, 94 WIP held a roast for Philadelphia Phillies legends Lenny Dykstra and Mitch Williams at the Electric Factory, where the two alums were heckled for nearly an hour and a half by local comedians and some of their sports peers.

However, just a few clips on YouTube have emerged of the event, leading many to wonder why more highlights have yet to come out? Whispers and mumbles from the crowd at the roast have been slowly leaking out from the event, but very few concrete details have been confirmed.

What happened at this thing?

END_OF_DOCUMENT_TOKEN_TO_BE_REPLACED 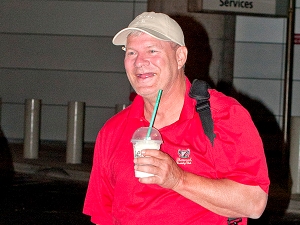 Philadelphia, PA – The energy was crackling at the Electric Factory Thursday evening as hundreds came out to see the roasting of Philadelphia sport legends Lenny Dykstra and Mitch Williams. Local comedians, athletes and media members all had their best material on hand to deliver a sound thrashing of the two embattled former Phillies.

Dykstra, however, had other plans.

“Before the first roaster even had a chance to get to the dais, Dykstra simply shook his head, stood up from his chair, and walked off stage. It was unheard of,” said Big Daddy Graham, the first scheduled comedian of the evening. “He absolutely ruined it for everyone.”

Graham was the first roaster scheduled to appear and approached the podium with a confused look on his face.

“Umm…well…uhh. You know, if Lenny was here, I would say something like, wow, how did you manage to have a worse post sports career Darren Dalton. He ranted about the end of the world and has a brain tumor, but people still wouldn’t take your life over his. Man, this is just not working.”

Unable to end the roast, presenters tried to tailor all of their material to Williams or broke down completely onstage, unable to improv anything in midst of the change.

In the case of Al Morganti, he did both.

“Hey Mitch, you chewed a lot of tobacco in your playing days, right? I bet you drunk drove a few times as well also, am I right folks?” He stammered at the podium, as the crowd and Williams looked on in silence. “Oh god this just isn’t working. Fucking Dykstra, what a piece of fucking shit. We go to all this trouble to put together an event and he goes ahead and just blows it all to hell.”

Morganti sobbed quietly onstage until he was escorted off by security.

As of press time, it was reported that Dykstra enjoyed a quite evening of doing cocaine and passing out in a rented BMW at 3 a.m.