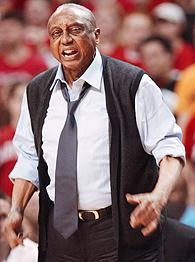 Jahlil Okafor was out before he even touched the ground.

76ers center Okafor is reportedly recovering at Jefferson  University Hospital after a reported attack by legendary Temple Owls coach John Chaney after the team charter touched down this morning at Philadelphia international airport.

Eyewitnesses reported Chaney jumped Okafor as the dour center walked through the terminal with several members of the 76ers coaching staff.

Chaney allegedly slipped an arm around the neck of Okafor and hooked his other arm around the young man’s biceps, slowly choking him out as the elderly coach dragged him to the terminal floor.

“My friend Bob Backlund taught me this back in 1985. It’s the Cross-Face Chicken Wing. Just accept it, shhhhh….shhhhh….it’s locked in, struggling will only make it worse. He’s just going to sleep, going to take a nice nap. Night night son, lullaby time, off to dream land,” Chaney said.

“I used to do this to Ron Rollerson every year when he would come in out of shape. You’ll learn…they always do. Don’t want to ever see you disrespect the game of basketball like you did last night ever again, you no defense playing son of a bitch,” Chaney added as Okafor made a soft gurgling sound, his eyes rolling into the back of his head.

Chaney reportedly was referring to a stretch of several plays during Wednesday night’s loss to the Miami Heat where Okafor showed little to no effort on the defensive end of the court.

Before he could be apprehended, Chaney released the choke hold and disappeared through the crowded terminal.

At press time, Chaney remains at large. He is expected to be pardoned for his actions by Mayor Jim Kenney.