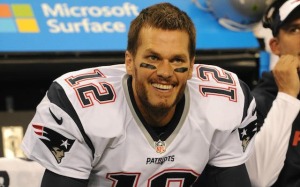 A Patriots representative said the quarterback was in good humor and ready to play in Super Bowl LI against the Atlanta Falcons.

“I guess you could call Mr. Brady a bit of an air-head after this one. Let’s just let the air out of this non-story, ok? Oopsy, forget I said ‘let the air out!’ It’s all in good fun,” the rep told the Super Bowl media.

When Brady lost control of his car for the brief moment, it reportedly side-swiped a bus from Our Lady of the Blessed Miracle Orphanage transporting 55 orphans to the Super Bowl, sending it crashing into a concrete bridge abutment. 53 of the children were confirmed dead on arrival and two were reportedly in comas with no detected brain activity.

The driver of the bus was ejected 500 feet from the vehicle and died of excessive blunt force trauma.