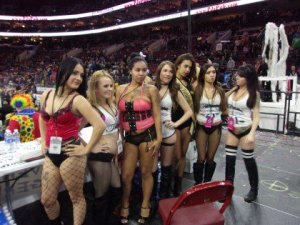 The worst moment of any stripper’s career…being a Wingette.

Philadelphia, PA – Strippers throughout the Delaware Valley were able to breathe a sigh of relief this morning after Wing Bowl 25 finally came to a merciful close. The annual eating event has long been described as the most “embarrassing and humiliating” day of the year for women who take their clothes off for money in Philadelphia.

City gentlemen clubs have provided their employees as “Wingettes” for the annual event, much to the horror of the women who actually have to attend Wing Bowl.

Luckily Wing Bowl is only once a year, most of the Wingettes agreed, and after the unpleasantness is behind them they can get back to their more dignified career of halfheartedly gyrating in the nude on the laps of strange men.

“After this morning, having a drunken Peruvian senior citizen awkwardly grabbing at my breasts at the club will be a pleasure compared to this nonsense,” Charlene Mountains said.

At press time, all Wingettes agreed that they would rather clean up the their respective gentlemen club’s bathroom with their tongues than have to go through Angelo Cataldi’s “morning inspection” ever again.