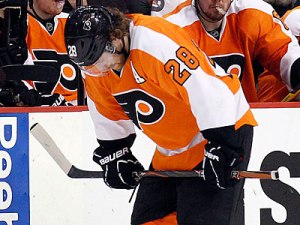 Philadelphia, PA – An eerie feeling came over the Flyers Skate Zone yesterday, almost as if every single active member of the roster suddenly realized that without the Eagles to occupy most of the city’s attention, they would now be the prime source of hope and attention for the city’s rabid fan base.

An ashen faced Claude Giroux addressed the media after a sloppy practice, where it was evident the entire team had reached the same epiphany and were already crumbling under the weight of Philadelphia’s expectations.

“It’s always tough when the Eagles lose. You feel all eyes on us. In the past the 76ers would maybe take a bit of the pressure away, but this year’s team, are you kidding me?” Giroux said. “At least with (Chip) Kelly losing his job it earned us another week or two before everyone starts to break down our performance game by game. God that is going to be awful.”

“We need that time to work on our game. How can I concentrate when two guys from South Philly are throwing haymakers at each other on the boards and the rest of the fans are screaming at the women in attendance to show them their tits?” Giroux said.

Rookie sensation Shayne Gostisbehere reportedly has already become a hot topic on 94 WIP, with hundreds of callers with little to no hockey knowledge needing an athlete to vent their frustrations.

“This Sean Ghosthall isn’t a Philly guy! We need some homegrown, born in the USA talent, this is ridiculous, what is Bobby Clarke doing to this team?” A frustrated caller asked Brian Haddad.

When informed Gostisbehere was American born and Clarke had not been the GM of the Flyers since 2006-2007, the caller said he still needed to “get his act together or get out of town.”

At press time, Giroux said the Wing Bowl could not come soon enough.