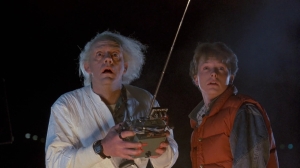 Philadelphia, PA – Mayor Michael Nutter and the Philadelphia City Council unanimously passed a measure this morning during an emergency council meeting to earmark $1.21 million of the city’s budget to the development of a time travel machine.

The city government passed the measure on Back to the Future Day, the day Doc Brown and Marty McFly traveled to in “Back to the Future Part II” when they used their time traveling DeLorean to go into the future.

“It’s no coincidence we did this on Back to the Future Day. If you recall, Doc Brown and Marty McFly used their time machine throughout the series of movies to right the wrongs of the past and improve their current time period. We hope to do the same in Philadelphia, namely by traveling back to Thursday, June 26, 2014 and stopping Sam Hinkie from ever drafting that complete stiff Joel Embiid. It’s just one of the events we plan on changing when we finally develop a super-cool time traveling machine,” Mayor Michael Nutter declared during a mid-afternoon press conference.

The city hopes to develop a sleek time travel machine made out of a “super awesome Corvette” or “bitching dune buggy,” Nutter revealed Wednesday.

The City Council has already earmarked several events to be changed, including the 76ers decision to draft Shawn Bradley ahead of Penny Hardaway in the 1993 NBA draft, Joe Jurevicius’s 2003 NFC Championship touchdown catch against the Eagles Levon  Kirkland, and just about every single roster move made by Ruben Amaro Jr. after the 2008 season.

“We might just go back in time to the night Amaro Jr. was conceived and make sure his parents don’t get together, that may be the safest option,” Nutter said, as the city council members solemnly nodded their heads in agreement.

When pressed on how the city council would actually change the events of the past, Nutter said the utmost care would be taken to avoid a scenario such as the one that happened in “Back to the Future Part II” when Marty and Doc Brown allowed Biff Tannen access to the gambling magazine that made him a millionaire and threw them into an alternate reality where Hill Valley was a horrid cesspool, Tannen was the most powerful man in the country, and Marty’s father George McFly was dead.

“We are taking every precaution to ensure we end up in a better reality than the one we’re in now, like when Marty returned to 1985 at the end of Back to the Future and his father was successful and his mother was no longer an alcoholic,” Nutter said.

“If our calculations are correct, you’re going to see some serious shit in the next year,” he said.

At press time, Nutter said the device should be completed by next year if the city can get its hands on some Plutonium and the Libyans don’t get involved.