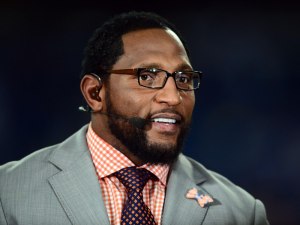 Ray Lewis opened up for the first time about his role in a 2000 Atlanta murder in a recently ghost-written autobiography. The Hall of Fame linebacker, two-time super bowl champion, and current ESPN analyst devotes an entire chapter to the incident that saw him charged, but ultimately found not guilty, of the murder of two individuals in a club during Super Bowl weekend.

According to police reports, Lewis and several members of his entourage engaged in a fight with two individuals who were ultimately stabbed and killed by either Lewis or a member of his entourage. Despite giving a false statement to police, Lewis was found not guilty. Joseph Sweeting and Reginald Oakley, friends of Lewis, were acquitted of murder and assault charges.

Of the incident, Lewis wrote he never would have murdered someone while wearing such expensive clothes.

“All that jewelry, plus my mink coat, I must have been wearing about a quarter-million dollars, but those were heady times, man. This was how we rolled, me and my boys, and when you come from nothing like I did, step into all this money like I did, you’re bound to strut a little bit. No way I’m going to risk getting blood on such fine clothing, so I made sure to take them off and carefully hand them to my friends before brutally stabbing those two people in the club. It was the smart and moral move,” Lewis wrote.

Lewis mentions the role his Christianity played in the incident. A devout Christian, Lewis said he heard God speaking to him that night in the club.

“I heard God’s voice. I did. He told me, ‘Hey Ray, you better think twice about what you’re doing. Make sure you don’t get any blood on those fine threads while you’re murdering those two people because they stepped to you in a club.’ So I made sure I didn’t. I gave them all to my friend who disposed of them before the police found us. I’m a man of God, I do what he says, man. Praise Jesus,” he wrote.

At the conclusion of the chapter, Lewis thanked God for keeping him strong and helping him get away with murder.