What day is it? Why, it’s Friday the 13th day, sir! And as we are want to do at the Coggin, we take a moment to reflect on this glorious day and ask ourselves the age old question: “Which Philadelphia sports figure would survive if he or she found themselves in the Friday the 13th horror series?”

Jason Voorhees is out there, sharpening up that machete, loading his spear gun, and getting ready to crush some skulls.

Like all horror movie franchises well into their fourth sequel, we’re just cashing in right now and fully expect this to be terrible. We’re just doing it for the money at this point and really sticking it to our hardcore fans.

Get caught up and see who survived the last three Friday the 13ths before dipping into this year’s slaughter. 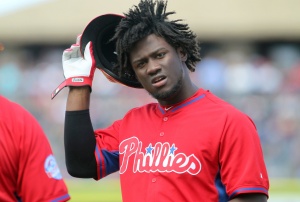 Odubel Herrera: Everyone’s favorite All-star snub, sadly, is not long for this world. Sure he’s a great hitter and plays a stellar center field, but his mind wanders and his lack of hustle in key moments would not serve him well when Voorhees is stomping after him with a pitchfork. Sorry Odubel, maybe you’ll come back in one of the sequels.

Means of Death: Hair dye replaced with a canister of acid that he casually splashes on his head.

Gabe Kapler: Tough call! Obviously in peak physical condition, Kapler could prove to be a tremendous foe for the undead Voorhees. However, his dedication to analytics would probably tell him to do some weird shift behind a tree when Voorhees is charging at him with a flat-edged shovel, or the “data” would tell him he stood a better chance of survival if he shot Voorhees once in the chest and then casually inspected his “corpse” without unloading the rest of the clip into him. Meatheads also don’t typically fare well in these movies. Sorry Gabe.

Ben McAdoo: Every horror movie needs a sniveling worm and a human villain who denies that anything strange is going on or that “we haven’t had those problems here in Philadelphia for the past three years. Jason Voorhees is dead and buried, so let’s leave him that way!” Would continue to deny that Voorhees has risen to terrorize the city yet again until he sees the hulking behemoth decapitate one of his lackeys halfway through the movie. McAdoo would 100% be the guy who locks the only exit behind him and screws over the rest of the survivors to save his own skin.

Means of Death: After locking out the panicked survivors, McAdoo would turn around ONLY TO SEE VOORHEES STANDING DIRECTLY IN FRONT OF HIM. One machete to the gut later and a pile of steaming guts splashing at his feet would be all she wrote. 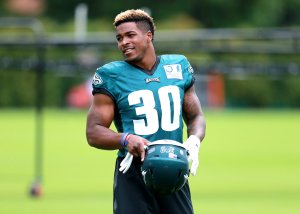 Corey Clement: The Eagles running back everyone seems to forget about. Clement would appear in the first act, disappear for the second, and then come back in the final act when you least expect it to save someone from getting their eyes gouged out. A real fan favorite, which of course means he’d be impaled on a fence post at the last moment to keep the audience on their toes.

Means of Death: Backhanded and flung into the air, only to land chest first on a metal fence post.

Brett Brown: “Hey, ahh, Varhees, how about you, ahh, pick on somebody yore own sizah.” The one guy in the movie who absolutely believes the protagonist from the jump that Voorhees has come back YET AGAIN to terrorize the City of Brotherly Love. A grizzled veteran who has survived the past three comings of Voorhees, would likely sacrifice self to allow Ben Simmons, Joel Embiid, and Markelle Fultz a chance to escape.

Means of Death: In the movie’s payoff, Brown and Voorhees would be squaring off, trading blows from their mighty fists, until Brown takes out a stick of dynamite and successfully lights it, only to be flung into one of the basket supports, breaking his back as Voorhees turns his attention to the frightened Sixers roster. As he raises his machete over the quivering Robert Covington, he feels a hand grasp at his leg. He looks down to see Brown sticking the still lighted dynamite into the back of his pants, as he frantically tries to grab it and shake off the mortally wounded coach. Brown screams at his players to flee the practice facility, before Voorhees pulls him up to his face. Brown smiles, gives him a wink, and says, “Game ovah,” before the ending facility blows up in spectacular fashion. END MOVIE.

BONUS SCENE AFTER THE CREDITS: The camera lingers over the smoldering wreckage of the Camden practice facility, and Voorhees’s mask clatters down onto a pile of smoking rubble. The camera pans into a closeup of the mask, ONLY FOR BRETT BROWN’S HAND TO POP UP OUT OF THE DEBRIS, GRABBING THE MASK, A 76ERS 2019 CHAMPIONSHIP RING ON HIS FINGER AS THE CAMERA CUTS TO BLACK.

Click on the links to honor the brave men and women of Philadelphia sports who gave their lives for this tired column premise.