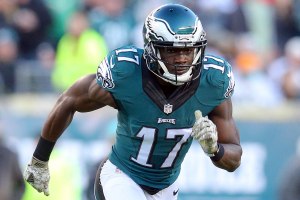 Philadelphia, PA – Nelson Agholor met with the media yesterday after news broke that the Eagles had signed wide receivers Alshon Jeffery and Torrey Smith and said he “couldn’t wait to mentor the new guys” when they arrived in the city.

When asked what he first thought of the signings when the news broke on social media, Agholor said he was excited to see the competition between Jeffery and Smith for the number two wide receiver spot on the team’s depth chart.

“Are you kidding me? Either of those guys would be perfect number twos on this team. One of them is going to have to settle for that third spot though, but it should be a hell of a competition. I can’t wait to open up the field for those guys,” Agholor said.

The third year veteran noted that he would “show the new guys the ropes” and promised he would help make their transition to a new team as easy as possible.

“I know how important it is for new guys to make that first impression when they come to a new team. I’m sure they’ll appreciate one of the more respected, talented veteran wide receivers on the team extending an olive branch to make their lives easier,” Agholor said, not a trace of irony in his statement at all.

“I know it’s probably a bit intimidating when you first meet with a guy who has been here, seen it all and has accomplished so much in Philadelphia, but really, I’m just a down to earth guy who is looking forward to meeting two new friends.”

At press time, Jeffery told the media that if Agholor didn’t give him his #17 jersey he would “make him eat dog shit, which his game most closely resembles” in front of the entire team during minicamp.