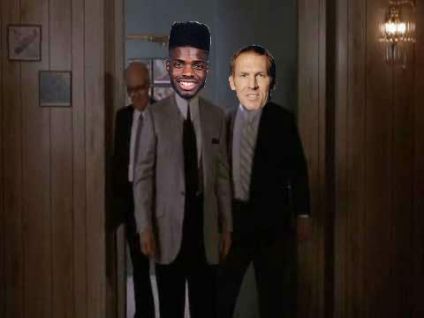 Nerlens Noel coming to the 76ers morning shoot around with 76ers GM Bryan Colangelo. The 76ers announced Noel would be a made man this week. (photo credit: @crimjimmegan)

Philadelphia, PA – An excited Nerlens Noel put on his best three piece suit and eagerly got into Bryan Colangelo’s 1969 white Cadillac Coupe Deville to attend the 76ers morning shoot around, his first since the news broke that the organization had decided to make him a made man and start him for the first time this season.

“This must bring you back to when you were made,” Nerlens said to Colangelo, who shrugged and smiled from the back seat.

“Oh that was a long time ago,” he said, as he instructed the driver to pull up to the side entrance of the 76ers Training Complex in Camden.

The news was received well by Noel’s teammates, especially centers Richaun Holmes and Jahlil Okafor, who likely won’t receive the honor themselves as they are both firmly behind Joel Embiid on the depth chart.

“As far as Richaun was concerned with Nerlens being made, it was like we were all being made. We would now have one of our own as a member,” Okafor told reporters.

However, when Nerlens entered the practice facility and noticed it was empty and the lights were off, he knew something was wrong.

Later in day after Holmes became worried that he hadn’t heard from Nerlens after the secret ceremony, he called Colangelo and inquired about his friend:

Colangelo: This is Bryan.

Richaun: You get it straightened out?

Bryan: No, we had a problem… and uh, we tried to do everything we could.

Bryan: Well, you what I mean. He’s gone, and we couldn’t do nothing about it.

Bryan: And that’s it.

Nobody has seen Noel since his ceremony and Colangelo has been tight lipped about the affair, but said he wouldn’t “be around” as much as he used to.

Okafor said he believed Noel’s disappearance was a result of some “real greaseball shit” and likely revenge for the unflattering remarks Noel had made about the front office this season.

“It was revenge for the Colangelos, and a lot of other things. And there was nothing that we can do about it. Bryan was a made man, and Nerlens wasn’t. And we had to sit still and take it. It was among the front office,” Okafor said.

At press time, Okafor was considering flipping on the organization, ratting out his friends and living out the remainder of his career in witness protection playing for the Denver Nuggets.