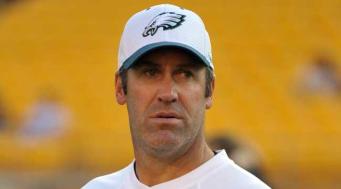 Doug Pederson feels he has a good play-calling system in place now.

Philadelphia, PA – On the morning of their first 2016 preseason contest against the Tampa Bay Buccaneers, newly minted Eagles Head Coach Doug Pederson has begun the process of sending in his first series of plays to quarterback Sam Bradford, with the hope that they’ll arrive by the start of the game.

Pederson, who has already faced criticism from fans and the media for his antiquated method of calling a play into the offense, said he has corrected his methods.

“We reviewed our play calling process and we feel like we really have the system down now. Should be a good game tonight, better start calling in those plays now,” Pederson said.

The head coach then showed the media how the proverbial sausage is made, and walked them through his play calling system:

It remains to be seen if this new system will be any more effective than what Pederson employed in games last year.