He will punish the wicked and make man pay for his hubris.

LAS VEGAS, Nev. – Tonight on NBC, Eagles long-snapper Jon Dorenbos, a master of the arcane, dark arts, will showcase his ethereal skills on the popular reality show America’s Got Talent, and brutally punish the nonbelievers of his malevolent sorcery.

In a 30-second teaser for tonight’s AGT, currently in its 11th season on NBC, Dorenbos is briefly shown on stage wearing a dark robe, his eyes rolled into the back of his head, body convulsing wildly as the lights of the studio flicker ominously.

In the next shot, AGT Judge Mel B, a mainstay of the show and former Spice Girl, is seen writhing in pain in the maws of the old god Cthulhu, who had likely been summoned by his evil and powerful master Dorenbos. 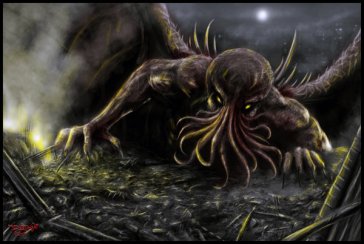 Cthulhu, the announced special guest for tonight’s America’s Got Talent!

“God damn, what have we got here, this is off the hook!” AGT Host Nick Cannon said from his usual location off-stage. When the jovial host turned to face the camera, tears of blood were seen streaming from his eyes and ancient Latin runes had been burned deeply into his perfectly moisturized face.

The disjointed, shaking and erratic teaser clip continues with a brief but unforgettable sequence of Dorenbos floating above the panicked crowd, smiling to himself as he watched the innards of host Simon Cowell boil violently and erupt from his open mouth after he had given Dorenbos’s performance an “X” for killing Mel B.

Speaking in tongues, Dorenbos then pointed to the main camera and the visuals shut off but the audio remained, as the tortured screams of the trapped crowd rang through the Las Vegas studio.

At press time, the NBC teaser urged viewers to tune in tonight at 8 p.m. to the network for the most exciting and soul-crushing episode of America’s Got Talent yet.