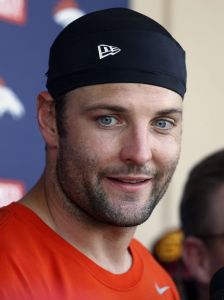 St. Louis, MO – Current free-agent wide receiver Wes Welker, who enjoyed many fine years with the Patriots and Broncos before suffering several severe concussions, worked out for the St. Louis Rams today in hopes of rejuvenating his stalled career.

The 34-year-old wide receiver has worked out for several teams this year and the last, having not played a game in the NFL since 2014.

He continues to express disbelief that he is not employed by an NFL team, who may be wary of signing the once elite receiver due to his history of concussions.

“I strongly believe I should still be in the National Federation Football League. The doctors say my brain function may not do too good, but I can still catch that dogskin with the best of them. Just give me a chance and I can lead this organization in catching feet, I tell you,” He told several assembled reporters at the Rams practice facility.

“I’m still good enough to pitch in this confederation, and there’s no reason I shouldn’t be a member of the St. Louie Hams, or any squad in this division. Just give me a bat, give me a ball, give me some shin guards and a ham sandwich and I’ll be ready to play each Wednesday,” a laughing Welker told several nervous members of the media.

Reports coming out of the workout claim Welker seemed a bit rusty and had forgotten several of the basic elements of the game itself, showing up to the tryout wearing flip-flops and asking scouts when he would get a chance to punt the ball.

At one point during the workout he lined up on the defensive side of the ball and then ran into the stands where he started to play with an empty popcorn bucket before his handlers brought him back onto the field.

“It felt great to be back out there with the guys. I thought we did enough to win out there today, but those Philadelphia Athletics just had our number. Lefty Grove pitched a hell of a game, had us all on our heels out there, he throws that apple with the best of them,” a glassy eyed Welker said, referring to a member of the Philadelphia Athletics, MLB 1930 World Series Champions, for some reason.

At press time, Welker had wandered into oncoming traffic outside of the practice facility and was reportedly trying to hitchhike to Gillette Stadium in time for Super Bowl XLVI.