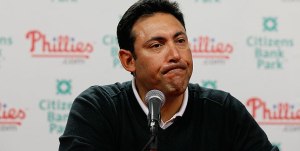 “We really thought he would be a professional after we (Macphail and Pat Gillick) told him the organization would not be renewing his contract next season. He was nodding along with us, he seemed ok, and then all of a sudden he scrambled from his chair, ran out of my office, and locked himself in the utility closet in Sub-basement C that we had moved him down to last month,” Macphail said.

He shook his head as he watched Amaro Jr. vow revenge to the organization before being quieted by a Philadelphia police officer’s taser. Another officer sprayed Amaro Jr. in the eyes with a heavy dose of mace for good measure.

Macphail said nobody knew what Amaro’s endgame was after he locked himself in his office. Employees felt he was simply being childish, but after several minutes in his locked office employees heard him trying to reach rival GMs and unload the few remaining valuable players still on the Phillies roster.

“I heard him speaking with Theo Epstein (Cubs GM) and tell him he would trade him Maikel Franco for a 3rd round draft pick in the 2018 MLB draft. He also said he would throw in Aaron Nola for good measure if Epstein would include a 5th round pick,” Macphail said.

“It’s a good thing we had unplugged his phone months ago. He had been talking to nobody the past several months. He’s deranged.”

As of press time, a sobbing Amaro Jr. rubbed his tear-stained, stinging eyes as he walked down Broad Street with his possessions in a cardboard box.

Thousands of cheering, jubilant Phillies fans escorted Amaro Jr. down Broad Street and formed an impromptu ticker tape parade to lead him out of town.