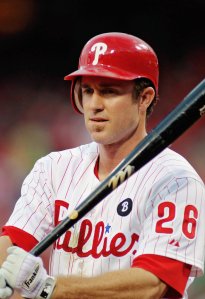 Philadelphia, PA – Details are emerging about a potential trade for long time second baseman and face of the Phillies franchise Chase Utley through the waiver wire over the weekend. Despite the injuries of the aged second baseman, several potential contending playoff teams are vying for his services, including the Chicago Cubs and San Francisco Giants.

Utley, however, has several demands of his own, as the veteran can deny any potential trade.

“I’ve been in Philadelphia for a long time. I love playing here, so if I’m going to be traded, I need a guarantee from the team I’m traded to that I will be given an opportunity to get my uniform on a daily basis,” Utley said.

“Do you see this uniform?” He asked, pointing to his spotless and crisp Phillies pants and jersey. “It makes me SICK. I wretch at the sight of it. I have to scuff up the pant legs, throw some dirty on that jersey. I want the same opportunity for any place I go.”

The grit fueled veteran looked at his sparkling uniform and let out a long, withdrawn sigh.

“It just looks so empty and awful. I don’t want finish out my career with a crisp, lovely uniform,” he said.

Cubs GM Theo Epstein assured Utley he would be given every opportunity to win playing time with the franchise. However, he did assure Utley on days he was not playing the franchise would provide him with a bag of dirt of his choice or a kiddie pool filled halfway with mud.