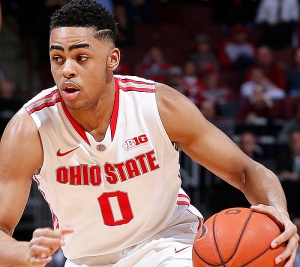 Philadelphia, PA – Impressed by the workouts and positive attitude of Ohio State point guard D’Angelo Russell, Ruben Amaro Jr. openly wondered if the Phillies could get in on some of this “sweet, sweet D’Angelo Russell action.”

“If the 76ers draft D’Angelo, could he come to a few of our games? Maybe shag some fly balls? He seems legitimately excited to potentially be playing for Philadelphia and we desperately need some positivity on this team. He seems like a bright young man, and someone who wouldn’t openly yell at Bob (McClure, Phillies pitching coach) about his inability to use the bullpen phone correctly.”

Amaro’s eyes brightened when he described the youngster’s quickness and potentially positive future with the city of Philadelphia.

“Could we at least get some photographs with him hanging out with the Phanatic? People still like the Phanatic, I think that would help us out a lot,” He said. “We just need something. I promise you we wouldn’t let him meet too many of our players, just a select few. If he met everyone he’d either be scared off or come out of the meeting thinking about suicide.”

When asked if D’Angelo Russell could potentially serve as a goodwill ambassador to the Phillies, Sam Hinkie said he wouldn’t let the young point guard “get within 10 feet of that dead carcass of a franchise.”

He then added Amaro Jr. should do his own legwork and he could “take a long walk off a short pier, to the delight of everyone in Philadelphia.”