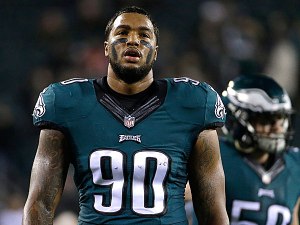 The soon to be unemployed Marcus Smith.

Philadelphia, PA – Marcus Smith’s spirits were high at the end of Eagles minicamp yesterday, as the second year linebacker was reportedly confident he could successfully qualify for unemployment benefits by the start of the regular season.

The linebacker was reportedly thrilled when Chip Kelly dropped off the free Pennsylvania unemployment benefit packets to his locker late Thursday afternoon.

“This is just fabulous. My confidence is the highest it has ever been since joining the Eagles,” Smith said, as he diligently plowed through the information.

Per Pennsylvania law, Smith could qualify for bi-weekly payments as high as $547.

Kelly said he was pleased at Smith’s progress and noted the ceiling was quite high for the second year linebacker who would no doubt be cut before training camp begins.

“He’s a great kid. We think he could really make something of himself if he just hangs in there and hauls himself up by his bootstraps. I could definitely see him in some sort of trade school this year if he gets his mind right and doesn’t get overwhelmed.”

As of press time, Smith was seen using the team’s computer and had successfully uploaded an application to Devry University.

He received a rejection letter less than 15 minutes later.