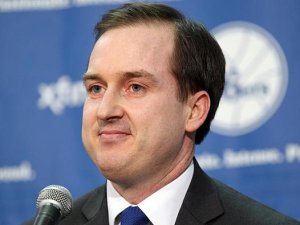 I need more second round picks…I desire them.

Philadelphia, PA – After a flurry of activity at the trading deadline yesterday, the 76ers are down to four active players on the roster for tonight’s game vs. the Indiana Pacers.

The only remaining players on the 76ers roster are JaVale McGee, Tony Wroten (injured), Andrei Kirilenko (has yet to appear in a game), and Jerami Grant. A D-league player from the Houston Rockets was included in the bevy of deals, but has refused to step foot in the Philadelphia locker room for fear of being traded again.

Several sources from the 76ers front office have expressed fear that Hinkie has become mad with power. After the deadline passed, Hinkie was found in his office speaking into a telephone that was clearly not plugged in.

“He was trying to trade Franklin the Dog (the 76ers new mascot) for a new emcee to announce the games. We had to put a stop to this,” A source said.

To round out the roster for the next game, the 76ers announced they would select a lucky fan from the crowd prior to tipoff to start at point guard.