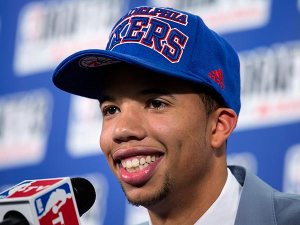 Hope you can still return that hat for store credit, Michael.

Philadelphia, PA – Continuing the tradition of athletes leaving town taking out advertisements in local newspapers for fans, Michael Carter Williams purchased full page colored ads in both the Philadelphia Inquirer and Daily News to hurl insults and thank fans for wasting his time during his tenure on the 76ers.

“Looking back at my two years here, I just have to say to each and every Philadelphia fan, from the bottom of my heart, to go fuck yourselves,” he wrote in the full-color advertisement, which featured a single photo of Williams flipping off the camera. “I sincerely mean those words. To every obese, piece of shit that screamed at me to make my free throws and stop turning the ball over, I hope you have a heart attack and drop dead in front of your friends and family.”

The second year player was traded last week to the Milwaukee Brewers as part of a three team trade, which saw the 76ers receive a first round pick in exchange for the young athlete.

Williams didn’t hold back when he reached 76ers GM Sam Hinkie in his letter.

“To that pasty, cunty, bloated mother fucker that has been wanting to trade me since his gummy hands gained control of the franchise, truly, I hope you have a stroke. I don’t want you to die, I just want you to be trapped in a husk of your former body, forced to watch me make all star game after all star game in future years, as you spend your remaining days drooling on yourself as you’re confined to an uncomfortable wheelchair.”

At one point in the advertisement, it seemed as if Williams had wiped excrement on the copy.

“Hopefully, you’ll be run out of this town by the ungrateful, blue collar slobs who will call for your head when none of your assets turn out to be anything, you analytics loving fat fuckwad.”

Several members of the media described the ad as being the most vicious exit from the city of Philadelphia since Eric Lindros left a flaming bag of dog shit on Bobby Clarke’s front porch.