Jonathan Papelbon with the glove currently involved in trade negotiations.

Milwaukee, WIS – Reports began flooding the CT offices this morning, as trade discussions between the Milwaukee Brewers and Philadelphia Phillies are coming full steam. The Brewers are reportedly interested in acquiring Jonathan Papelbon’s glove, with several sources claiming the Brewers are willing to pay “upwards of $50” for the black Wilson A2K glove.

“We will not refute the rumors being published by the media. We are interested in acquiring Papelbon’s glove,” said Doug Melvin, GM of the Brewers. “I am currently negotiating for the rights to the glove with Ruben, and we hope we can reach an agreement soon. Spring Training is starting soon, and we really feel one more glove will put us over the top.”

In 2014, the Brewers were only in possession of 9 gloves, which had to be shared amongst the Milwaukee athletes as they were substituted into each game.

Carlos Gomez infamously refused to enter a late inning game last season, as he didn’t want to use the one left-handed glove on the team.

The glove would up the teams total to 10. The Brewers are still allegedly in the market for a catchers glove as well, as Jonathan Lucroy was forced to used an infielders glove behind the plate for the entire 2014 season.

Jon Heyman for CBS Sports reported earlier this morning that talks for the glove had stalled, when Amaro apparently balked at Melvin’s request that a case of sunflower seeds be included in the deal.

“The Phillies are asking for $50 and an authentic ‘Hank the Dog’ water bowl in exchange for the glove,” Heyman said. Hank the Dog is the unofficial mascot of the Brewers. 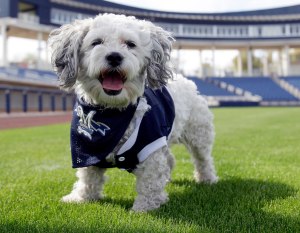 Ruben Amaro Jr. caved and agreed to trade the glove and the rights to Jonathan Papelbon for $10.