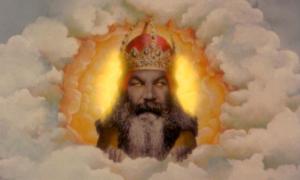 The Afterlife – Following an after game interview that saw Seattle Seahawks’ Quarterback Russell Wilson break down and thank God for leading him to victory, a livid God checked in with the CT through a series of emails and denied he had anything to do with the Seahawks victory.

“Do you really think I would have let a Patriots/Seahawks Super Bowl? Really?” The lord and savior said in an email. “I thought I made it quite clear to Russell when he threw four interceptions on the day that I in no way wanted him to succeed. You suck Wilson.”

God stressed he would not have thrown his holy weight behind the Seahawks if he wanted to endear himself more to the people of earth.

Continuing a horrid NFL weekend, God also confirmed that he lost a “shitload” of money on the Colts after the 45-7 drubbing against the Patriots.

“Chuck Pagano survives cancer and he goes out like this? I had nothing to do with that one, people, let me make that clear,” he said. “Sounds like that was right up Buddha’s alley. You know him and his ‘if people expect only happiness in life, they will be disappointed’ teachings. He’s a cool guy, don’t get me wrong I like him a lot, but teach your people a lesson when the Jehovah doesn’t have some sweet action on the game, come on man.”

God confirmed that he would not be in attendance at the Super Bowl and if New England wins another championship, the world would be thrown into 500 days of complete darkness.