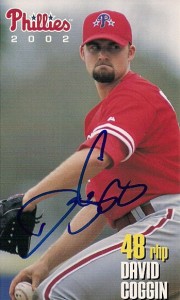 Welcome to the newest blog on the Philadelphia sports scene, The Coggin Toboggan. Here at the CT, we vow to uphold the traditions upon which this site was founded.

Almost 15 years ago a right-handed pitcher found his way to the Philadelphia Phillies main roster, called up in June of 2000, making his major league debut on June 23. He’d start in five games that year for a team that would finish 65-97, but he showed something to the roster, going UNDEFEATED with a sterling 2-0 record and a 5.33 ERA.

Sure, David Coggin didn’t have the brilliance of an all-star pitcher or the handsome good looks of a young Otis Nixon. Sure, he would only appear in 55 more big league games over the course of two more lackluster seasons before retiring from the game he loved so dear…but ask anyone on those squads for a word or two on Coggin, and the majority will say, “Who?” And yes, the only remaining story worth telling about David Coggin was when a teammate tricked him into thinking the home games were played in Camden, New Jersey, and he cried for two hours straight until Terry Francona told him to shut the fuck up.

But do you know what David had over those three stellar years nobody else had? Something that nobody on those rosters could take away from him? A funny last name that could be rhymed with toboggan.

Fifteen years ago, while just a teen, my group of friends and I decided to attend a Phillies game with a toboggan and the greatest fan group of all was born. Coggin’s Tobaggon.

Oh what glorious plans did we have to honor our hero. After each and every strikeout registered from our hero, a ceremonious ride down one of the stairways at Veteran’s Stadium was to be performed by one of the members of the group…safety and brain cells be damned.

We never did make it to a game. The logistics of carrying a toboggan into the Vet and the threat of plummeting from the outfield stands onto the turf to our death proved too much. As quickly as it had been born, Coggin’s Tobaggon suffered a bittersweet death.

But the name hasn’t left my head in all these years. It has been resurrected in the form of a blog dedicated on bringing Philadelphia the finest in whiskey drenched sports musings.

So lets have some laughs, watch as our beloved Philadelphia teams struggle to succeed, and always remember what David Coggin said to a group of Philadelphia reporters the day he was released.

*Most likely did not happen