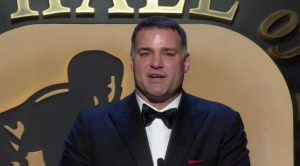 Carl Lindros, father of one of the newest members of the Hockey Hall of Fame, Eric Lindros, accepted the induction and delivered a speech on behalf of his son, despite Eric being healthy and present at the induction ceremony.

Carl beamed at the podium as he thanked the assembled crowd for the great honor.

“I’ve worked so hard to go where I am. This is just a culmination of the years of blood, sweat and tears that I’ve put into my son,” Lindros said, wiping tears away from his eyes as Eric looked on from the side stage.

“I did it. I can’t believe it, but I’ve finally reached the pinnacle,” he said.

END_OF_DOCUMENT_TOKEN_TO_BE_REPLACED 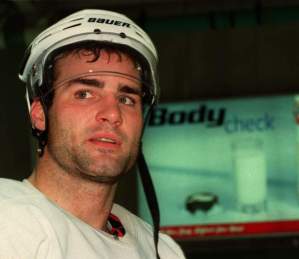 Toronto, Canada – A jubilant Carl Lindros celebrated with his wife, Bonnie, in their Toronto home Monday afternoon after the NHL Hall of Fame selection committee elected Carl Lindros’s son to the hall of fame.

Lindros, who once claimed the Flyers had tried to kill his son in 1999, can finally take his place among the great, meddling hockey parents of all time.

The helicopter parent said this “made all of my personal sacrifices, blood, sweat and tears completely worth it” and that he was “very honored” to be a part of “my big day.”

END_OF_DOCUMENT_TOKEN_TO_BE_REPLACED 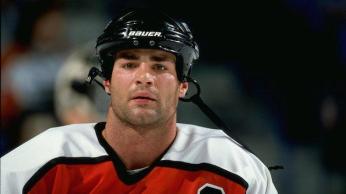 Will this be the year Eric Lindros is elected to the NHL Hall of Fame? His father plans on it.

Toronto, Canada  – Carl Lindros, father and former agent to Eric Lindros, told his son Monday that he would “reach out” to several members of the NHL Hall of Fame Committee and “pull a few strings” to ensure Eric received his hall of fame nomination this year.

Lindros, the supremely talented center who spent the majority of his career with the Philadelphia Flyers, racked up 865 points over 760 regular season games and led the Flyers to a Stanley Cup Championship in 1997. He won the NHL’s Hart Trophy in 1995 as the league’s most valuable player, but may be remembered more for injuries derailing his career and for having two perceived “meddling” parents who steered the career of their talented boy. He also never won a Stanley Cup, which many cite as a big knock against his resume for the Hall of Fame.