What a morning! The sun is shining (it isn’t), the birds are chirping (they’re not, they’re all frozen) and Mike Lombardi, the purveyor of the least correct comment/take about Philadelphia sports in the history of sports talk, is oiling up his disgusting old-man foot in preparation to firmly lodge it in his mouth yet again.

We have truly been blessed, Philadelphia.

Last night, while likely taking a moment out of his nightly routine of applying generous dollops of lanolin oil over every inch of his wrinkled, musty body, Lombardi must have tuned into the 76ers victory over the Charlotte Hornets and run afoul of a sight he just couldn’t abide.

Why……there was Markelle Fultz, the still “injured” 76ers point guard, DARING to show his face on the television broadcast, wasting valuable moments he could have been in the trainers room balancing his scapular muscle or studying film! He needed to share his displeasure, to alert the masses of god fearing sports fans of this GHASTLY affront to everything good and pure about basketball.

His fingers trembling, rage filling every crevice of loose skin flap and jowl, Lombardi fired up the old Twitter account on his sun-bleached Gateway desktop to share his utmost displeasure.

Fultz put himself in the camera shot on tv during a break. I wish he was as eager to put himself back on the court. Ain’t going to happen this year

Congratulations! You know what this means, Philadelphia….Fultz will 100% be back this season. Oh what a lovely day! Thank you for gracing us with your inaccurate presence, Michael, it’s exactly what a fatigued, young teams needs going into the playoffs. To be touched, NAY, to be FAVORED by a Lombardi take destined to blow up in his face only comes around once a millennia…and for it to happen to a city twice in one calendar year? My god, Philadelphia is a city of destiny.

As we all certainly remember, Lombardi sanctified Philadelphia before the NFL season by slapping his meat hooks on his keyboard to vomit out this string of words for the The Ringer:

“Now, everybody knows Pederson isn’t a head coach. He might be less qualified to coach a team than anyone I’ve ever seen in my 30-plus years in the NFL,” Lombardi wrote for The Ringer in September. “Pederson was barely a coordinator before he became head coach. Can you imagined if we elected a United States president who didn’t have any real training? Sorry, don’t answer that.”

Need I remind any of you how that ended up? 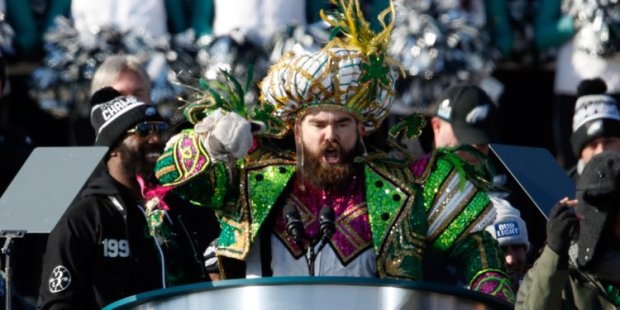 I’m not a religious man, but I can’t wait to see everyone on Broad Street in a few months for the 2018 76ers championship parade. Markelle Fultz’s victory speech at the art museum steps is going to be one for the ages.

Please take a moment to thank Mr. Lombardi on twitter for gracing us with his particular brand of idiocy once again.