Nick Foles has been around, folks, and he’s one of the most talented backup quarterbacks in the NFL. But still, following the news that Carson Wentz had indeed torn his ACL and would miss the rest of the year set off great waling and gnashing of teeth throughout the Delaware Valley.

BUT DON’T FRET! Nick Foles is going to be fine and I’m fully expecting the Eagles to still reach the Super Bowl.

Let me reveal to you the source of all my confidence in one Nick Foles.

Three years ago then Eagles defensive end Connor Barwin participated in a Reddit AMA and was asked by an inquisitive fan as to whom had the biggest hog in the Eagles locker room.

Barwin’s reply was a simple one :

A: Doesn’t the internet know it’s Nick Foles?
“I do not condone this reply.” — Evan Mathis

How can a man with an abnormally large penis not inspire the greatest confidence in a fan base or a locker room? Who among his teammates will not run through a wall for Foles after seeing his massive pendulum of a penis swaying majestically in the breeze of the showers after a game?

I mean, goddamnit, Brett Favre is one of the best quarterbacks to ever play the game…and thanks to Deadspin I think we all know that he’s no Foles. If Favre had that much confidence in his play and that much of a gunslinger attitude, what the fuck is Nick Foles going to do when he gets his chance to play in the playoffs with a LOADED team like the Eagles?

It’s a scary proposition for opponents. Even Albert Einstein knew and warned us all of the terrible potential that a Nick Foles huge-dick offense could have on the NFL and the world at large.

“The unleashed power of (Nick Foles’ penis) has changed everything, save our modes of thinking, and we thus drift toward unparalleled catastrophe.” – Albert Einstein

The Eagles should drop leaflets from a dirigible over the city of whomever they’re playing in the first round of the playoffs, warning teams of the shock and awe coming their way.

Here’s a prototype I whipped up. Eagles, if you’d like to use this, just give me credit please: 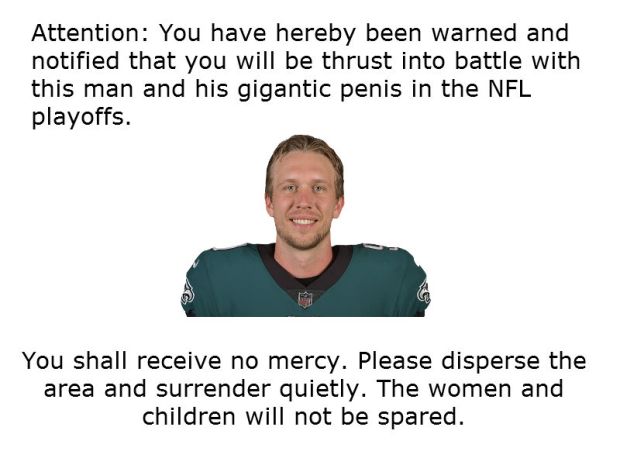 Don’t say we didn’t try to warn you, NFL. You’re hereby on notice.