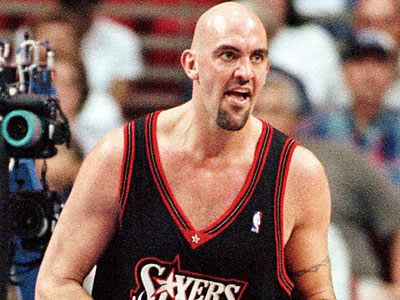 You are one ugly motherfucker.

Back in 1999 I saw Matt Geiger viciously elbow Keith Van Horn in the face at the behest of a pair of drunkards at the First Union Center.

Let me back up. The year was 1999. I was 17 and the weight of the world had yet to completely crush my spirit. The 76ers were a few years away from being relevant, but they were entertaining and the seeds had been planted for greatness. Allen Iverson was crossing up Jordan, the country was prosperous and led by an adulterer instead of a dunce, and my buddy’s dad had bought lower level season tickets for 1998-1999 for no reason whatsoever.

Seriously, I think he went to like, maybe 4 games that entire season. So who took up the slack? Yours truly. What a time to be alive.

Looking back on it, I probably should have done something nice for my buddy for taking me to like 30 games that season, but I didn’t. MY PRESENCE IS GIFT ENOUGH.

The seats were directly behind the basket in the section where Iverson’s mom sat for every game, half paying attention to the action until she heard the PA announcer mention him scoring and then jumping up with her homemade signs.

It was awesome…every game I’d buy a Mountain Dew, some nachos, and we’d shoot the shit with two alcoholic businessmen who had season tickets directly next to my friend’s.

These guys were great…probably in their early 30s and would just start POUNDING beers left and right the second they sat down. By halftime they’d both be blackout drunk, screaming obscenities at the visiting team, and just being general nuisances. I hoped I could grow up to be half as cool as those fuckers.

We thought they were great. Looking back on it, they were more than likely complete assholes and I would hate to spend thousands on season tickets only to sit next to two pieces of Philly garbage like that, but to my 16-year-old self they were hilarious.

One night will forever stand out in my memory. It was a 76ers vs. New Jersey Nets match up that saw Keith Van Horn return to Philadelphia a year after he refused to play for the team and forced his way off the roster on draft night. Of course he was getting booed every time he touched the ball and the guys next to us were screaming at him the entire game.

But something would happen later in the game that I swear really happened. If anyone else was in attendance and remembers this, I’d love to hear from you so I confirm it wasn’t a fever dream or the delusions of a man teetering on the brink of mental illness.

In the third quarter, the teams were lined up for a foul shot during a TV timeout. Van Horn was standing next to Geiger under the basket, and the drunks started to pipe up, SCREAMING as loud as they could for Geiger to punch Van Horn in the face. Just begging him to clock Van Horn.

Because we were just a few rows away from the court, there was no way in hell both of them didn’t hear their pleas for Geiger to cave in Van Horn’s skull with his meaty paw.

Geiger looked over at our section and gave a bit of a smile and then, I swear, WINKED at the two drunks as whoever was at the free throw line began to shoot.

The shot missed, Geiger corralled the rebound over Van Horn, and then swung one of his elbows up at Van Horn’s face and caught him flush on the side of the head, dropping the little twerp to the floor.

I’ll never forget this next moment for the rest of my life…but as Geiger was whistled for a foul he started to nod and POINTED directly at the two drunks, basically saying “that one was for you two.”

The drunks loved it, we loved it, the crowd FREAKED out, and I can only assume Van Horn is suffering from debilitating CTE to this day because of the shot to his noggin.

Van Horn would go on to have an underwhelming career, Geiger would retire to his buffalo farm years later, and I never forgot the day a pair of drunks inspired Geiger to almost kill a man on the basketball court.