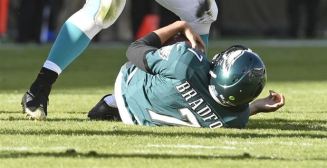 Minneapolis, Minnesota – Just days after arriving in Minnesota as part of a blockbuster trade over the weekend, the Vikings were forced to place Sam Bradford on the IR after an elk wandered onto the practice field and trampled an unaware Bradford into the turf.

Bradford, who was wearing headphones during the pre-practice stretch, did not hear warning from his teammates as a wild elk somehow broke into the practice facility and stampeded towards the 28-year-old quarterback.

“It was horrible. I’ve seen some terrible things in the past week, but this was even worse than Teddy’s (Bridgewater) knee practically snapping off his leg. Fur and long sleeves everywhere, it was one of the most disgusting things I’ve ever seen,” head coach Mike Zimmer said.

Sources confirmed Bradford looked up at the last moment to see the frothing, 500 pound male animal rear up on its hind legs and smash its sharp hooves on his forehead, making his eye cross more as he valiantly tried to fight off the huge beast.

During the scuffle, the Elk’s antlers reportedly became entangled with Bradford’s trademark long sleeves, dragging the concussed and battered quarterback hundreds of yards around the practice field as Vikings representatives chased the enraged creature.

After several agonizing minutes, the cornered elk finally was able to shake the unconscious Bradford free of its antlers. His body rolled several feet and landed face down in a tub of lutefisk.

Sources confirmed a number of players on the practice field couldn’t stifle their laughter as a stinking Bradford was carted off the field.

“It was tragic….but also a bit funny. Right into that lutefisk…couldn’t have been more of a perfect shot,” Zimmer said, chuckling to himself.

Bradford was placed in a medically induced coma and a priest was brought in to perform his last rites, just to be safe.