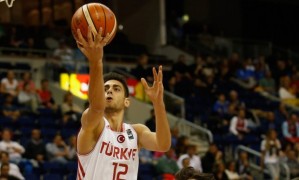 Furkan Korkmaz, one of several foreign athletes the 76ers have selected this year for their unique brand of “skills.”

Philadelphia, PA – Quickly realizing that the top-tier, top-flight free agents available this year were not willing to sign max deals with a young and inexperience 76ers team, team scouts have been scouring the back end courts, war-torn arenas, and shady, dimly lit half-court games at all corners of the world to assemble a cutthroat team of mercenaries and hacks to don a 76ers uniform for the 2016-2017 season.

Vince Rozman, 76ers director of basketball operations and scouting innovation, said his team of scouts were dispersed throughout the world to assemble the “best of the best” that the rest of the NBA had shunned throughout the years.

The transition started at this year’s draft, with the organization selecting Timothe Luwawu-Cabarrot from France and Furkan Korkmaz, who played for Anadolu Efes of the Turkish league last season.

Luwawu-Cabarrot, a proficient computer hacker and athletic small forward, had to break out of La Sante, a French super prison, to attend the draft. The young hacker had been charged with “cyber crimes against humanity” and sentenced to 100 years in the French prison.

Luwawu-Cabarrot is all smiles after being selected by the 76ers and escaping out of the French super prison, La Sante.

The talented player was able to cobble together a small computer from various electronics he found in the prison and traded cigarettes for from fellow inmates. He was able to hack into the entire compounds HVAC system and flooded the prison with nerve gas, effectively knocking out every guard and prisoner while he donned a gas mask he crafted out of toilet paper and prison clothes.

He is currently a French enemy of the state and the 76ers are going to great lengths to keep his whereabouts on a daily basis unknown from the French parliament.

Korkmaz, known as the “Istanbul Assassin,” moonlit as a rogue shooting guard for “The Sultans,” a member of the Turkish Basketball Kabul, an unsanctioned league that played all of its games last year under the darkness of midnight. Each game featured tremendous amounts of money changing hands, as fans recklessly bet thousands on the outcomes.

“He’s a steely shooter. One Shah from a territory that no longer exists once bet 1,000,000 Turkish Lira on a free throw attempt from Korkmaz, threatening to cut off his shooting hand if he missed. As you can see, he has both hands,” Rozman noted.

Korkmaz is still under contract with The Sultans and will not be able to participate with the 76ers next season if he loses a shooting contest with the league’s best shooter, “The Shadowed Turk,” to be held at a secret location at the crack of dawn on an undetermined date.

“He said if he won he would be ready for training camp, but if he lost we would never hear from him again. So, it’s a waiting game at this point,” Rozman said.

The organization rounded out its international signings by coming to terms with Spanish point guard Sergio Rodriguez, who unlike the other signers, has already played in the NBA. Rodriguez enjoyed success with the Portland Trailblazers from 2006 to 2009, but abruptly retired from the NBA after an unfortunate incident in a Portland nightclub that saw three Oregonians dead at his hands.

“A judge ruled he was not at fault, that he had just been using his tremendous hand-to-hand combat skills that he crafted through years of training in the Spanish mountains as self-defense, but the young man just couldn’t take the guilt,” Rozman said.

Rodriguez reportedly left America and returned to his home country of Spain, crawled into a bottle in the town of Mijas, and didn’t come out for the next 7 years.

Rozman and several officials met him at a local cantina, where the disheveled and unshaven point guard was passed out at a table with a bottle of tequila, and asked him to put aside his bad memories to help out a young team on the rise and in need of a leader.

“He flat out refused, telling us he would never return to America, for the shame was too great. We left, but gave him a plane ticket in case he changed his mind. He showed up at the facility over the weekend with nothing but a burlap sack and his basketball shoes,” Rozman said. “He signed a one-year deal and is ready to go.”

“God I love it when a plan comes together.”

The three will also pair with Dario Saric, who may or may not be the future power forward of the 76ers, but is most certainly the leader of an international smuggling ring that has befuddled and eluded capture from Interpol for years.

At press time, several 76ers officials confirmed the organization has reached out to international thief Hans Gruber to see if he’s interested in an assistant coaching position.