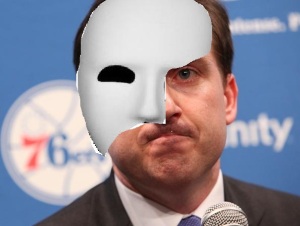 New York City, NY – Documents leaked to the media this morning have revealed that NBA officials are notably concerned that the Phantom of Sam Hinkie will attempt to disrupt the proceedings of the 2016 draft lottery, scheduled to be held tonight at approximately 8 p.m.

Hinkie, the disgraced former GM of the Philadelphia 76ers, was believed to have perished in a great fire in his home office the night his resignation letter to the franchise was published by numerous media outlets.

However, since that fateful day several strange occurrences have been noted in the NBA headquarter offices and the New York Hilton Midtown, where the lottery will be broadcast live to millions.

“Just last week a sandbag filled with all the contracts Hinkie made during his tenure fell from the rafters of the NBA headquarters cafeteria and came inches away from crushing Commissioner Adam Silver. If he hadn’t gotten up just a second before he would have been killed,” an anonymous source said.

“After, an ominous laugh echoed through the cafeteria halls and a cloaked figure was seen escaping through the duct work. He looked badly burned and quite out of his mind. We were told to keep quiet, that it was just an accident….but it just didn’t feel right. Lives could be at stake.”

The “accidents” started to pick up as the NBA draft lottery drew near. Reports have shown the entire NBA computer system crashed during game one of Golden State vs. OKC, Marv Albert’s toupee disappeared moments before he had to appear on air, and all of the Jumbotron “Charge” jingles were replaced with “10, 9, 8, 76ers.”

Following each accident a handwritten letter smelling of fine perfume would mysteriously show up on Silver’s desk, warning the commissioner that more “atrocities” would occur if the lottery were not postponed.

“Fare thee well, great doom will befell all who attend the lottery. The Phantom knows all and sees all. Thou dare cast me away for turning the system on its head? For knowing the full value of a second round pick and my precious assets? You shall be doomed if the lottery doth go on as planned. The process lives on in your nightmares,” a portion of the most recent letter read.

At press time, a picture of Dario Saric being held hostage in a grimy, abandoned copy room had been delivered to Silver with the ominous warning, “You have been warned.”