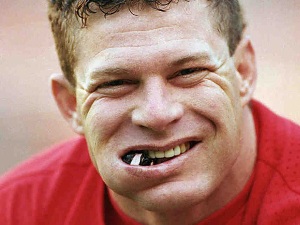 Lenny Dykstra, famed member of the 1993 Philadelphia Phillies that stole the heart of the city on their fabled run to the Word Series, joined Twitter yesterday in what was certainly the classiest course of action he’s taken in years.

Twitter, a festering breeding ground of casual racism, sexism, trolling, death threats, and general toxicity will likely be right up the alley of the man known as “Nails,” who has long cultivated an attitude of prickishness after his playing days were finalized in the 90s.

Oh so this is Twitter? I can say whatever the fuck I want right?

The man who was sentenced to a three-prison sentence in 2012 for grand theft auto by a Los Angeles Superior Court and who swindled investors throughout the 2000s with phony financial advice and false promises, can likely do no worse on the social media platform well known for public figures making complete asses of themselves.

Dykstra, the man who crashed his car in a drunk driving accident in 1991 that cost he and passenger Darren Daulton several months of the season, really couldn’t co too much worse on Twitter if you think about it.

At press time, Dykstra noted he would stick with Twitter for a while to promote whatever bullshit he was throwing at his fans, but would likely deactivate his account because there were “too many assholes” sending him mean tweets.