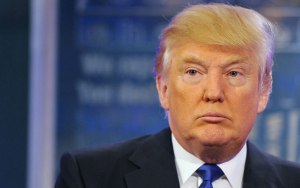 Philadelphia, PA – Donald Trump, a Republican candidate for the presidential nomination, held a competing memorial for Ed Snider in the Wells Fargo Center parking lot after he learned Snider’s will specifically banned him from any Flyers events for the rest of his life.

The blustering blow hard, speaking in front of an assembled group of mouth breathers and malcontents, denied that he had been kicked out of Snider’s suite during a playoff game for speaking too much during the action.

In fact, Trump said Snider actually asked him to take over the team because he was “in over his head.”

“Ed Snider was a loser. I don’t wish to speak ill of the dead, but I’m alive and he’s no longer here, so I win. I’m sorry, but it’s true,” Trump said. “Ed actually tried to sell me the Flyers back in the 90s. He begged me to take over this organization, to give it some much needed class. He threw himself at my feet, asking me to take this dump of a team off of his hands and run it like I successfully ran the New Jersey Generals in the 80s and got them into the NFL, where they won three consecutive Super Bowls.”

“Maybe I’ll buy it now. I will make the Flyers great again, that is a promise to you.”

When asked by a Daily News reporter how he was going to purchase the organization when it wasn’t for sale and how he would improve it if he did, Trump answered succinctly.

“It’s simple. I’ll just sign the top attackers and stingiest goal keepers in the league, all of them, and I’ll make the New York Rangers pay for it all. Believe me, I know how to get things done. Also, I promise you that nobody of the Muslim faith will ever be allowed to attend another game at the Wells Fargo Center as long as I’m in charge,” he said.

At press time, Trump was met with thunderous boos and was struck with an empty beer bottle by a well placed throw from a member of the Flyers faithful.

No charges were filed and Flyers fans were lauded for their bravery by the national sports media.