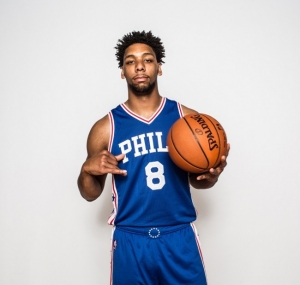 Philadelphia, PA – After the 76ers dropped their eighth game in a row to open the season, the franchise received some good news for one of its athletes.

Jahlil Okafor, currently the only bright spot in an otherwise dim season, told 76ers representatives he had reach a verbal agreement to return to Duke University this season.

“Great for Jahlil. He deserves to play for a winning franchise,” GM Sam Hinkie said. “We couldn’t be happier for him. It’s a great career move for him and will really help him turn into the basketball player he wants to be.”

Okafor said he couldn’t wait for the NCAA season to begin.

“It’s an unbelievable feeling, to be going from where I am right now to playing for Duke. I’m really going to have to elevate my game to play for Coach K. I love my 76ers teammates, but they’re not of Duke University caliber. It’s going to be a huge transition for me, that’s for sure,” Okafor said, donning a Blue Devils cap after the 76ers loss.

Coach Brett Brown was disappointed with Okafor’s decision, but said it was best for his development and he would not get any better playing for the 76ers.

“We’ll just sign Furkan Aldemir or some other foreign piece of garbage I’ve never heard of. Hey, maybe Jahlil will put in a good word for me down at Duke? I could be an assistant to Coach K I bet!” An excited Brown said, as a glimmer of light appeared for a brief moment in his dead eyes.