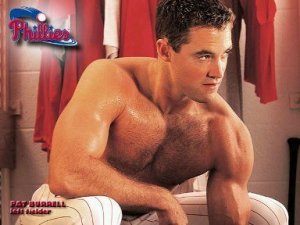 Experts are predicting this year’s devastation could be the worse yet, far worse than the “Class-4 Burrell” the city experienced in October of 2008.

“The last time Pat Burrell blew into this city it took Philadelphia months to recover,” said Glenn “Hurricane” Schwartz. “So much destruction. We never thought we would get back on track, but we managed to survive. Unfortunately, from our early estimations this year’s Burrell could be bigger, more destructive, and far more drunk than the Burrell we remember riding on top of the horse drawn beer cart at the 2008 World Series championship parade.”

Burrell will be in the city for his induction into the Phillies Wall of Fame Friday evening, which is leading bar, tavern, and club owners to take no chances.

Johnathan Tomsullivan, owner of McGillin’s Olde Ale House, aid he would not make the same mistakes he made in 2008.

Tomsullivan estimated it took bar employees months to clean up the puddles of caked vomit from the mens room and even longer to fully wipe down the bar’s surfaces, which were caked with so much cocaine it “would have made George Clooney jealous.”

Tomsullivan said the ale house has stocked up on emergency supplies, such as extra cases of Jagermeister, vodka, and absinthe for even the potential sight of Burrell this year. 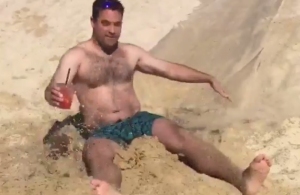 Burrell causing (and downing) a mudslide.

Experts warned the city that an unencumbered Burrell could wreak even more destruction on Philadelphia and bump up its population even more.

Philadelphia’s population jumped by 5% overall nine months after the 2008 incident.

“My girlfriend was out of my sight for maybe one minute, at most two, Halloween night 2008 when we were having a drink at Plow in the Stars after the Phillies parade,” Anthony Clarkson said. “Nine months later, she was in a delivery room popping out a Burrell bastard. I, as well as so many other men, had been Burrelled that night. I will never let that happen again.”

As of press time, Mayor Michael Nutter warned residents to stay in their homes Friday evening, even in case of emergency.

“It’s just not worth it. You don’t want your mother, daughter, sister to be Burrelled. Lock your doors, pray to your personal savior, and just hope he passes out in a cocaine and quaalude induced stupor before he can do too much damage.”

“May God have mercy on us all.”