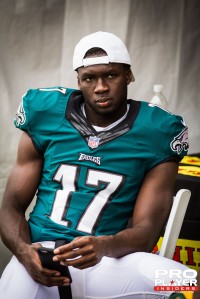 Nelson Agholor is dangerously close to wearing his welcome out in Philadelphia. Another week, another series of soul-crushing drops from the city’s most despised wide receiver.

You know what? Nelson doesn’t let it bother him. Nah, why would he? He just brushes off the drops, goes on to run his next route (and probably drop that pass as well), and (most likely) hits up a strip club after the game despite warnings from teammates and franchise officials.

But how DARE anyone ask Nelly about the drops after the game. He doesn’t cotton to that nonsense. Nelly pretty much punched his ticket out of town after the year ends by criticizing a reporter for asking him to address his case of dropsies that has plagued him all year.

Compare Nelly’s reaction to pressure to that of Wade Phillips, 69-year-old defensive coordinator of the Denver Broncos who absolutely got TRUCKED on the sideline of yesterday’s game against the Chargers, who took his lumps with aplomb and good grace.

Let’s compare the results of both Agholor and Phillip’s horrendous days at the office and how they affected the fanbases and teams.