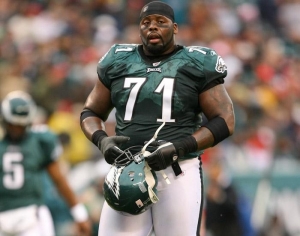 Many think Jason Peters will represent the Philadelphia Eagles in the upcoming draft.

Philadelphia, PA – ESPN’s Mel Kiper has released the latest version of his 2015 NFL draft and has the Eagles sending starting left tackle Jason Peters overseas to fight in the Vietnam quagmire.

Peters will likely begin in the reserves, Kiper said, but will be called up to the first starting infantry unit of the Fightin 105 to serve his country.

“Peters has the size and the elusive quickness that so many of our grunts lack out in the jungle,” Kiper said. “Stick an M16 in his hands and he’ll be a killer. He’s 6-feet, four-inches tall, and believe me, they do stack shit that high.”

Kiper said Peters needs to work on his war face before he can truly make a difference out in the shit, however.

“Outstanding, Private Foles, I think we have finally found something that you do well!” Kelly was heard yelling at Foles at a recent offseason workout as the quarterback worked on his deep balls. “Jesus H. Christ, you are definitely born again hard!”

Foles, however, may not be a great selection, said ESPN’s Sal Paolantonio, as he hasn’t been on best terms with his fellow teammates. A report leaked last week claiming that Lane Johnson led a “blanket party” after lights out, warning Foles not to mention anything because it was “all just a bad dream.”

As of press time, Foles was seen entering the team restroom after lights out with a reported crazy look in his eyes.