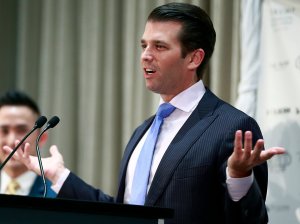 Donald Trump Jr. has found himself in hot water this morning after he released a four-page email chain in which the son of President Donald Trump apparently discussed the “overblown hype” the media had bestowed on uber-popular 76ers center Joel Embiid.

Trump Jr. released the following statement on his twitter account after several media outlets published stories alluding to his damning conversation about the transcendent talent that will elevate the 76ers to glorious heights the likes of which 76ers fans have never seen:

“To everyone, in order to be transparent, I am releasing the entire chain of emails I had with Ron Goldstone on June 23, 2017, a day after the NBA draft, who was relating a request from Emin, a person I knew from the 2013 Russian Basketball Super League 1, who offered to provide me with crucial analytical evidence that proved Joel Embiid did not deserve to win the NBA rookie of the year award and would be a middling center for the Philadelphia 76ers.”

The emails are included after the jump: