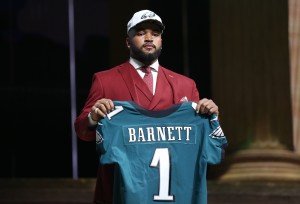 Thousands of penny pinching cheapskates throughout Philadelphia rejoiced Thursday night after the Eagles announced Derek Barnett as their 14th pick in the 2017 NFL Draft.

The realization that several rolls of duct tape, a black magic marker and a steady hand could alter the Fred Barnett number 86 jersey into a Derek Barnett number 9 jersey pleased the city’s misers to no end.

“It’s a draft day miracle. My Fred Barnett jersey has risen again and will have a new life,” Angelo Maranaro of South Philadelphia said, celebrating the pick in a Chinese made Fletcher Cox knock-off jersey he purchased for $10 off ebay.

Maranaro then high-fived a friend clothed in a number 81 jersey that had the name of Terrell Owens crossed off in magic marker and replaced with Jason Avant.

The elation felt by the Philadelphia congregation of skinflints Thursday evening could only be potentially rivaled by the Eagles signing backup quarterback Colt McCoy and the athlete selecting to play in the number 25.

Chip Kelly must be furious this afternoon, as an anonymous Eagles front office employee has leaked a comprehensive list of available free agents who the organization will be targeting at the start of free agency on Tuesday, March 10.

The Eagles are widely expected to be one of the major players in free agency this year, as the team had over $50 million available to spend.

Here is the list of players the Eagles are reportedly going to try and ink this offseason.