Apparently it’s not as hard for Eagles fans in Minneapolis right now as Vikings fans led them to believe.

As hundreds of crestfallen (and butthurt) Vikings fans promised to start up Uber businesses this weekend to drive Eagles fans to wrong locations, created Facebook groups to organize meet-ups to throw trash at Eagles fans, canceled Eagles fans AirBnBs before the Super Bowl, denied Chris Maragos reservations, and generally promised to make life miserable for any Philadelphia Eagles fan that dared show up for the Super Bowl, it’s proving to not be all that bad for the throngs that made the trip.

I wanted to see just how difficult it would be to get a reservation for 10 Eagles fans on short notice in Minneapolis bars and restaurants near U.S. Bank Stadium. At the very least, I figured, the salty rejections from business owners would make for some good content.

It turns out that most business owners in Minneapolis aren’t as idiotic as the Vikings fans encountered on social media, because it’s QUITE EASY to make a reservation for 10 Eagles fans for tonight during prime dinner hours at just about any bar or restaurant within a mile of the Vikings stadium.

I sent out the following email this morning (or an extraordinarily similar version) to nine restaurants and bars within a mile of U.S. Bank Stadium, asking for a 10 person reservation to eat at 7 p.m. for tonight. I specifically mentioned the diners were from Philadelphia and were Eagles fans.

All of the restaurants were replied too and told to cancel the reservations within minutes.

Five out of nine of the fine establishments I asked for reservations with were thrilled to welcome 10 Eagles fans.

If you’re an Eagles fan, in Minneapolis and want a place to eat tonight, these restaurants will be more than happy to welcome you in. 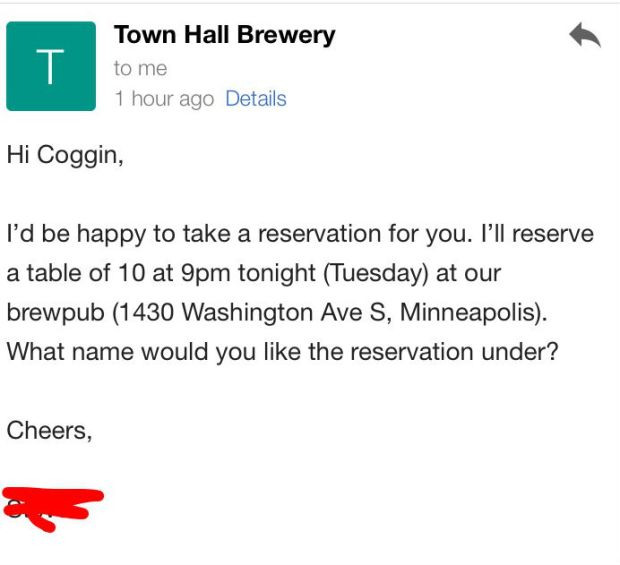 Unfortunately for Corrin (?) the Pourhouse is not open tonight, but it’s more than happy to host a special Philadelphia Eagles event this Saturday!

This was my favorite…

Great news! But even better….they’ve got a special drink for all you thirsty Eagles fans out there to make you feel right at home! The Schuylkill! (it actually sounds awesome) 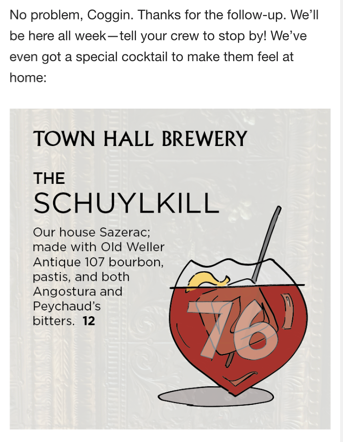