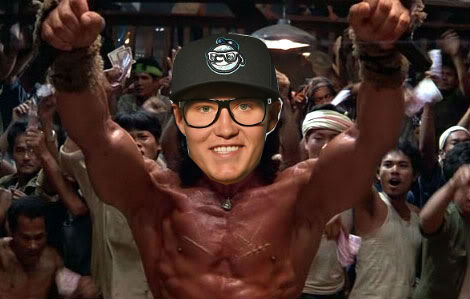 A sweating, flustered Matt Klentak enters the Buddhist monastery, scanning the red robed holy men for the man he’s come to see. His eyes squint and he nods his head as he sees his acquisition, the man they call The Hammer, working silently on an ox cart to repair a broken axle.

Klentak walks slowly up to the 23-year-old closer, observing his work. Hammer’s head raises slightly, sensing a presence behind him. His shoulders slump and he exhales wearily, knowing what’s going to come next.

Hammer: “Where are you coming from?”

Klentak: Do you want to tell me about it?

Hammer: Tell you about what?

Klentak: Yesterday. I’ve seen you stick fighting in a warehouse in Bangkok. And today I find you working in a monastery.

Hammer: They let me live here, I fix things.

Klentak: And the stick fighting?

Hammer: I just do that for their lack of money.

Klentak: Yeah…I saw you give it to the monks.

Klentak: I do. Hammer, I’d like you to take a look at these photos. I don’t know how much you know about Philadelphia. Most people can’t even find it on a map. Nearly two-million people, mostly blue collar workers and their families. They’ve been systematically humiliated by the Phillies. Nobody has pride in the organization anymore.

Hammer: And what’s that got to do with me?

Klentak: I want you to come with me, Hammer. I traded for you last night. Gave up an all-star reliever. Pat Neshek.

Hammer: I’ve put in my time.

Klentak: What does that mean?

Hammer: It means my war is over.

Klentak: This mission is important, Hammer.

Hammer: Do you really think we can make a difference?

Klentak: Let me tell you a story, Hammer. One day a scout brought home an unpolished pitching prospect. He worked on it for months, training, smoothing out his rough edges, until finally he was finished. When he was ready he showed it to the organization, and they said he had created a great player. The scout said he hadn’t created anything, the pitcher was always there, he just cleared away the small pieces. We didn’t make you this fabulous pitching prospect, we just shifted away the rough edges.

Hammer: I guess I’m not ready yet.

Klentak: Promise me you’ll look me up if you ever get back to Philadelphia.

Hammer: I will….KLENTAK….I’m sorry, but it has to end for me sometime.

:: Klentak leaves the monastery, dreading his arrival back to Philadelphia, to face the media head on. As he arrives at the tiny airstrip in rural Fort Collins, a figure appears at the end of the runway, a burlap sack in hand, a baseball glove sticking out from the top. Klentak nods slightly to the figure as it gets closer. ::

Hammer: You didn’t think I’d let you go to this party alone?

:: Klentak and Hammer clasp hands, biceps rippling, knowing their fates will forever be intertwined in the epic oncoming journey. ::

(End scene. I smell an Oscar)