Editor’s note: I really thought we gave up on this column? It’s evident I suck at it. Sure, we all get to have a few cheap laughs at someone’s expense, but holy shit am I awful at making these picks. If you are actually using them to make gambling decisions than you have a big, big problem. I’ll just lose you money. Don’t listen to me on anything ever. That being said….

OHHHHHH MY WHAT A DAY! The Eagles (5-7) are taking on the hated Washington Redskins (6-5-1) and their slightly better than average quarterback Kirk Cousins. YOU LIKE THAT? HUH? THAT’S RIGHT.

This week I 100% GUARANTEE TO MAKE YOU MONEY WITH OUR PICK. We have a great guest picker coming in, someone who really knows his stuff.

The Eagles are currently 1-point underdogs in their matchup. But who will make our picks this week? 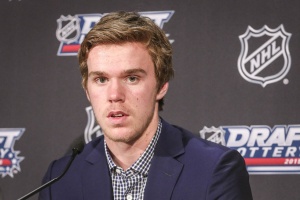 ::Slight sniffling noises are heard, as someone is obviously trying to stop himself from crying::

It’s….it’s not fair. I was supposed to come back to Philadelphia and win. I was the one who got hurt last season after that dork Manning slightly rubbed against me, made me catch a skate, and MADE me crash into the boards and separate my shoulder.

::tears start to form around his eyes, as McDavid’s bottom lip begins to quiver::

NO….NO IT’S JUST NOT FAIR. I was the one who wanted to win tonight, I am the best young player in the league, my team is in first place, I was the one who scored and then put on my big boy pants and made a big deal out of cussing out the Flyers. Those….those bullies.

I’m the face of the league. ME. Connor McDavid. Everything is supposed to work out for me, I was assured by Mr. Gary (Bettman) that I would be the best for the next 15 years.

::Tears begin streaming down his face::

This is all stupid. STUPID. I don’t care, I don’t care about anything. Make your own stupid football picks, this is so dumb, I hate hockey and I hate all of you!

::Runs into his bedroom and slams the door, jarring loose the “No Girls Allowed” posters::

I don’t care, make your own picks.