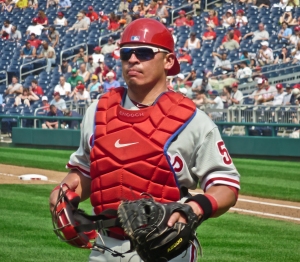 You were the best, Chooch.

OOOOOOOOOOOOOOOOOOOOOCH. Ahh that felt great. One last Chooooch before the beloved Phillies catcher and second to last vestige from the 2008 Phillies World Series team arrives in sunny Los Angeles to reunite with Chase Utley.

Unlike all those dogs that disappeared from my home when I was a kid, Chooch really is going to a better place with wide open spaces where he can dance and prance for the rest of his days.

One last postseason run for the man who hit the shortest World Series game winning hit I’ve ever seen.

One last postseason run for the man who caught a perfect game and no hitter in the same season.

One last postseason run for the man who caught the third strike to seal the 2008 World Series, the only championship I’ve ever seen.

Everyone loved Chooch. There wasn’t anything to DISLIKE about a catcher who came out of nowhere, had the love of some of the best pitchers the Phillies have ever seen, and had a knack for coming through in the clutch.

(Not sure where this first came from, but it might have been The Fightins blog. Correct me if I’m wrong)

But good god does this make me feel old all of a sudden. Ryan Howard remains as the last remaining player from that fabulous 2008 roster, the best season I’ve seen in my life as a Philadelphia sports fan, and he’s likely on his way out after this year ends.

Eight years ago I was single, living in Philadelphia with two of my best friends, and in my MID 20s. Fuck me.

Now I’m old, living in the suburbs, married and have a kid. God damn, what happened?

Chooch, I promise if you come back to Philadelphia next year with the Dodgers and hit a home run, I’ll give you a standing ovation. Hit another one and I’ll be the first to request a curtain call.

Go win another one for us and enjoy the ice cream.