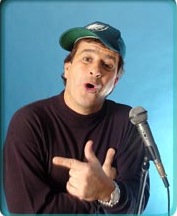 Philadelphia, PA – The jig is up.

In a scandal that may rock the popular sports talk radio station to its core, 97.5 FM producers Jason Myrtetus and Pat Egan have revealed that infamous 97.5 FM mid-day host “Mike Missanelli,” a stereotypical Italian dunderhead who appeals to the lowest common denominator, is in actuality a fake character cooked up by Egan.

Egan said he created the character in the early 2000s when “he” first appeared on then 610 WIP. Thought of as a one-shot character designed to infuriate listeners and garner hatred throughout the city, Egan was surprised when 610 hired him to reprise the character on a daily basis as a host.

“I can’t believe what we got away with. I tried to make him as unlikable as possible, with just the most idiotic sports takes day in and day out, but people just couldn’t get enough of ‘Mike.’ We used the dopiest picture for his bio on the site (seen atop the page). I even got ‘fired’ after he got into an ‘on-air fight’ with a co-worker when I didn’t want to play him anymore,” Egan said.

“But then Jason Myrtetus and 97.5 FM came a calling, and well, money talks,” he said.

With Myrtetus as his advocate, Egan was told to “push the boundaries” to get Missanelli on the map for the new sports talk station.

Egan was more than happy to oblige.

Saying Missanelli was the “exact opposite of him,” Egan used Twitter to his advantage and created a Mike Missanelli account, which he used to drum up publicity for Missanelli and his show.

Over the course of several years he sent joyful tweets celebrating the career ending injury of Victor Cruz at an Eagles game in 2014 and sending hateful tweets to Michelle Beadle about “being fat.”

Egan said it never went too far, but was surprised fans of the show didn’t figure out Missanelli was fake before now.

“How could you not? All of the incessant talk about his Italian heritage? The nonstop Sopranos references? Opening the Vault every week and the idiotic general knowledge Wednesday questions? It was all so hack. Didn’t anyone notice that Mike would ALWAYS take the opposite side of public opinion? That was his schtick for years and people in this town just ate it up,” Egan said.

Egan noted it was a relief that he no longer had to play Missanelli and could now focus more on his secondary, slightly less racist character “Dwayne from Swedesboro.”