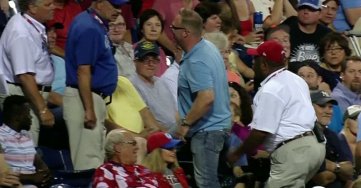 Unruly fan being tossed from the Phillies game. (via ESPN.com)

Philadelphia, PA – A heckling Phillies fan was ejected last night during a contest against the San Francisco Giants by home plate umpire Bob Davidson for “absolutely no reason,” according to the ejected fan this morning.

Davidson stopped the crowd in the sixth inning and ejected a fan after his taunts became sexual in nature and wouldn’t stop.

The fan, who reportedly lives in Delco and goes only by the name “Bug,” said Davidson tossed him despite “doing a whole lot of nothing” and “cracking everybody up” in his section.

“Nobody cared. Believe me. I was cracking everybody up, we were all having a good time, and then this guy comes over and asks me to leave. He got in my face, I should have jumped over the dugout and gotten in HIS face, but der were kids der, so I decided to be the bigger man and leave, ya know? I didn’t say anything offensive,” Bug said from his double-wide, 25 minutes late to work at the local quarry.

Bug admitted to yelling the “69th street” insult at Davidson, but said he properly explained the meaning of the “69” term to several children sitting around his section.

“Kids need to learn about 69ing at some time. Nothing better than your old lady going down on you with her snizz in your face, you know what I’m saying? Or are you a fag? No offense if so, just saying is all,” Bug said to one of the reporters speaking to him this morning.

Bug said he was considering taking action against Davidson at the advice of his legal counsel, “J-Fudge,” who attended one semester of junior college as a pre-law major.

“The Fudger says I can make some big bucks with a lawsuit against Davidson and the Phillies. Freedom of speech, you know? I paid for my ticket. First amendment, right Davidson? I can say what I want and do what I want whenever I want. This is America, ever heard of it?” Bug said, cracking open a tall boy as he got into his Dodge Ram pickup.

“Maybe I can even score some Eagles tickets for this year in the lawsuit. Fucking Bradford, what a pussy. E-A-G-L-E-S EAGLES!”

At press time, Bug said he would likely just bring a bag of rocks to the next game Davidson umpires in Philadelphia and get even Delco style.